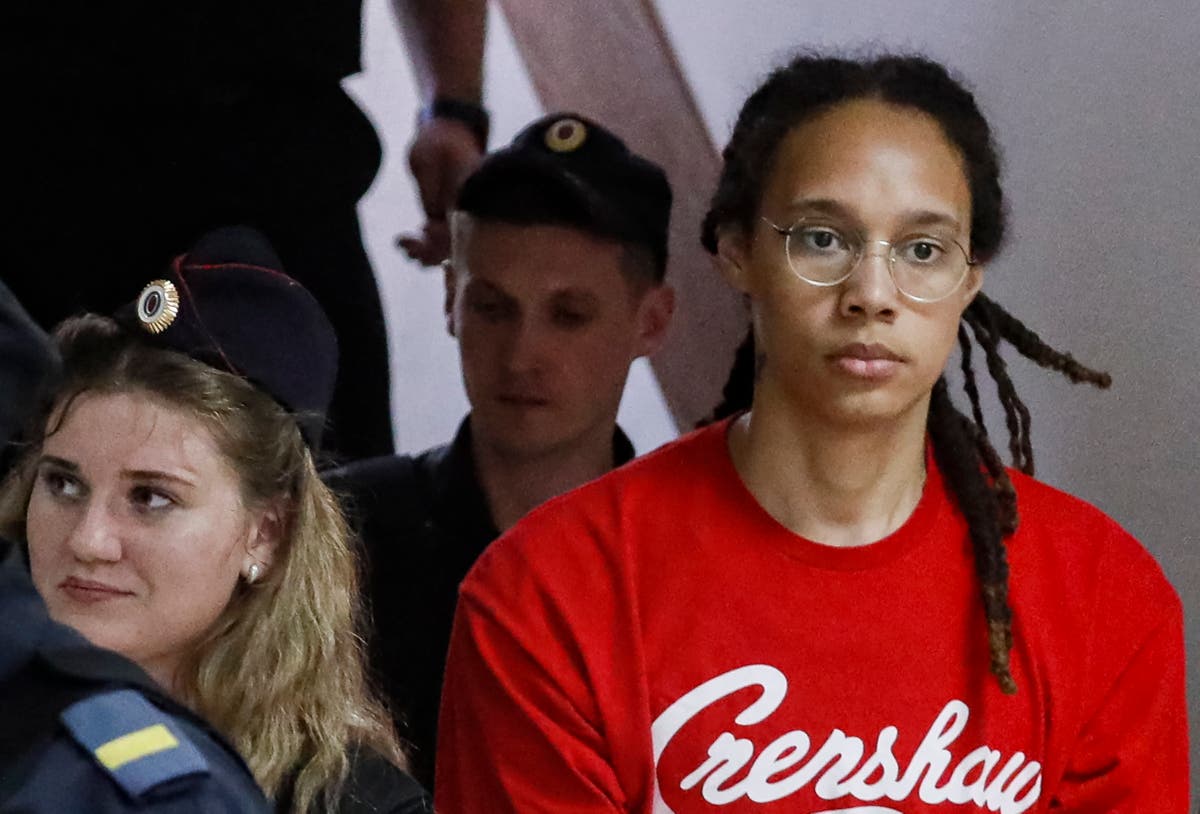 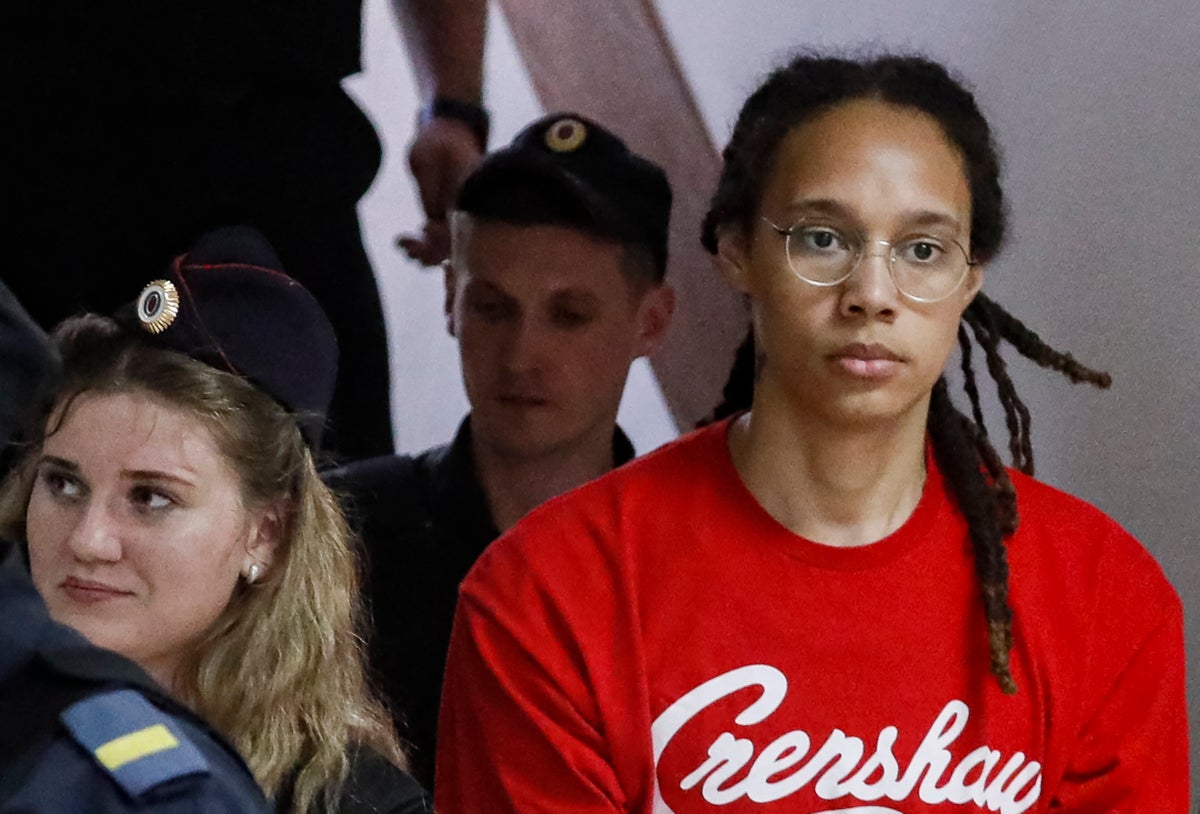 More than four months after her arrest in Moscow, US women’s basketball star Brittney Griner has returned to court for the continuation of her trial for drug charges.

The two-time Olympian was led into court at Khimki City in handcuffs, clutching a photo of her wife Cherelle. She was joined by her lawyers and US embassy staff. Only a few journalists are permitted in court.

The charges against her include intentionally transporting narcotics. Facing up to 10 years in prison in Russia, Griner pleaded guilty but added she there was no intent to break the law and she had packed in a hurry. She is hoping for leniency from the court.

Griner will give testimony later with the next court hearing scheduled for 14 July. Elizabeth Rood of the US Embassy was able to speak with her dela in court and share with her a letter from President Joe Biden.

A center for the Phoenix Mercury, Griner had played for UMMC Ekaterinburg in Russia during the WNBA off-season, Griner was arrested when Russian airport security say they found vape cartridges containing hash oil in her luggage.

Russian officials have said Griner can seek clemency or appeal after any verdict is handed down.

Speaking outside of the courtroom, Brittney Griner’s lawyers say their plan now is to count on the leniency of the Russian court given the WNBA star’s guilty plea and statement that she did not intend to break the law by transporting the hash oil, but had been packing in a hurry.

It is hoped that this will speed up a verdict and move of a possible prisoner swap forward.

MSNBC host Reverend Al Sharpton has called on President Joe Biden to help him arrange a visit to see WNBA star Brittney Griner at her prison in Russia.

“It’s my intention to be in Russia next week. And I hope the White House will help to make it possible for me to do a clergy visit to let her know of her support and to let her know that her family dela and everyone is concerned about her and pray with her,” Mr Sharpton said on morning joe on Wednesday morning.

The reverend said he had spoken with Ms Griner’s father about the visit and that seeing her in person was important to establish how well she is being treated.

Ms Griner has been in contact with US Embassy staff and has written regularly to her wife and pleaded directly to President Biden, but visits have been difficult given Russia’s diplomatic and economic isolation over its war in Ukraine.

Mr Sharpton said he wants to “bring a direct message back to this president from her and to hear from her. And you must remember as her wife her has told me, she she’s in a prison where most of the people can’t even talk English. She can’t even communicate with the people who run the prison. She she’s in a Russian jail.”

He added: “This is atrocious at best. We don’t even know if she’s even remotely guilty of what they’re saying. Is she being used as some political tool for Putin? We don’t know. Which is why we want to go.”

WNBA star Brittney Griner has pleaded guilty in a Russian court to drugs charges that could see her sentenced to ten years in prison.

The basketball player returned to court on Thursday to face her trial as a senior Russian diplomat said that US criticism of Russia’s handling of the case wouldn’t help Ms Griner’s possibilities of being released.

“I’d like to plead guilty, your honor. But there was no intent. I didn’t want to break the law,” Ms Griner said in English. Her words were translated into Russian for the court, Reuters reported.

Gustaf Kilander has the latest.

‘I’d like to plead guilty, your honor. But there was no intent. I didn’t want to break the law,’ said the WNBA star in court

US official shared Biden letter with Griner at court

US Embassy cartoons d’affaires Elizabeth Rood tells the media she spoke with Brittney Griner in the courtroom today.

Ms Griner told Ms Rood she is eating well, is able to read books, and under the circumstances, she is doing well.

“Most importantly, I was able to share with Ms Griner a letter from President Biden, and Ms Griner was able to read that letter,” says Ms Rood. “I would like again to emphasize the commitment of the US government at the very highest levels to bring home Ms Griner and all US citizens wrongfully detained. As well as the commitment of the US Embassy in Moscow to care for and protect the interest of all US citizens detained or imprisoned in Russia.”

US basketball player Brittney Griner pleaded guilty in a Russian court on Thursday to drugs charges that could see her face 10 years in prison, a Reuters journalist reported from the courtroom.

Griner’s family have called on US President Joe Biden to step up efforts to secure the WNBA star’s release.

“I’d like to plead guilty, your honor. But there was no intent. I didn’t want to break the law,” Griner said, speaking English which was then translated into Russian for the court.

“I’d like to give my testimony later. I need time to prepare,” she added.

The next court hearing was scheduled for 14 July.

WNBA star Brittney Griner has been escorted into court for the second day of hearings in her trial on charges of smuggling drugs into Russia.

Ms Griner was arrested in February at Moscow’s Sheremetyevo Airport after some hash oil was detected and found in her luggage, for which she now could face a prison sentence of up to ten years.

Dressed in red and wearing handcuffs, the two-time Olympian was clutching a bottle of water and a folder of papers topped with a screenshot of her wife Cherelle, who has sat for interviews demanding the US government do more to secure her release.

Ms Griner was later joined in the courtroom by three US embassy representatives and her lawyers. No TV cameras and only a few journalists are allowed in.

White House Press Secretary Karine Jean-Pierre on Tuesday said the case of WNBA star and US olympian Brittney Griner’s continued detention in Russia is “a priority” for President Joe Biden and his administration after a letter from the basketball player to Mr Biden was made public by Ms Griner’s family.

“This is an issue that is a priority for this President,” said Ms Jean-Pierre, who noted that the US has classified Ms Griner as being “wrongfully detained” by the Russian government.

Brittney Griner’s wife Cherelle has said she finds it “very disheartening” that she still has not heard back from the White House after the WNBA star felt a handwritten letter to President Joe Biden.

Ms Griner appealed directly to the president to help her efforts to win freedom from detention in Russia on alleged drug charges involving hashish oil.

Her family had no success in contacting the president regarding the issue, which led the Phoenix Mercury center to write to Mr Biden in person.

‘My wife is struggling, and we have to help her,’ Cherelle Griner tells Gayle King on CBS Mornings

WNBA player Brittney Griner has written a letter to President Joe Biden pleading for help in freeing her from jail in Russia.

In excerpts shared by her representatives, she writes: “As I sit here in a Russian prison, alone with my thoughts and without the protection of my wife, family, friends, Olympic jersey, or any accomplishments, I’m terrified I might be here forever.”

The New York Times reported on Thursday that Ms Griner is in the Correctional Colony No. 1 outside of Moscow, a former orphanage rebuilt a decade ago to serve as a prison for women awaiting trial and women serving their sentences. The Russian government has not confirmed Ms Griner’s whereabouts of her.

The Times reported that the facility is artifically lit, with “gray painted halls and grim tall walls” and that Ms Griner is also not the only foreign national held at the facility known as IK-1 for drug possession in recent years.

Ms Griner has is being held in Correctional Colony No. 1 outside Moscow