Last week the pop star deactivated her account following mean comments from her family who were excluded from her wedding.

But Britney is back online, and she’s showing off her new house – which is the reason why she and new husband Sam Asghari haven’t gone on a honeymoon.

“Haven’t been on my honeymoon yet … got married and moved into a new house around the same time … not the smartest thing to do,” she captioned a photo of her in a bikini in her new pool.

“Oh well it’s coming together,” she said about her new house, which they moved into the weekend after her wedding.

Britney added that her new home has a massive backyard, which her dogs are absolutely loving. Along with two pics by the pool, she uploaded a video of Asghari diving into the water.

Last week, the ‘Toxic’ singer deleted her social media accounts after her mum Lynn commented an eye-roll emoji on one of her posts. Dela all of her family were noticeably absent from her wedding. She’s been estranged from them since she began to fight her conservatorship in 2020.

The pop star and her sister, Jamie Lynn, in particular have been feuding, after Jamie Lynn released a memoir that detailed her sister’s conservatorship, which Britney has claimed is full of “misleading or outrageous” claims about her.

Britney’s sons with ex Kevin Federline, Sean Preston, 16, and Jayden James, 15, were also not in attendance, though not because of any bad blood.

“They’re happy for their mom and they are hopeful that Sam and Britney are starting a great future together,” Federline’s attorney Mark Vincent Kaplan told the publication. “It’s their night and they didn’t want to take away from them.” 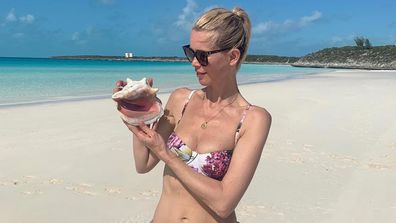 Claudia Schiffer sizzles in bikini while on vacay at exclusive location