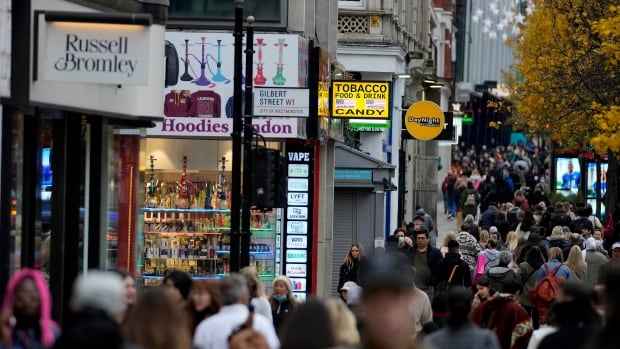 Britain’s inflation rate rose to a new 40-year high of 10.1 per cent in July, a faster pace than in the US and Europe as climbing food prices in the United Kingdom tightened a cost-of-living squeeze fueled by the soaring cost of energy .

The double-digit appears in consumer prices over a year earlier was higher than analysts’ central forecast of 9.8 per cent and a jump from the annual rate of 9.4 per cent in June, the Office for National Statistics said Wednesday.

The increase was largely due to rising prices for food and staples, including toilet paper and toothbrushes, it said.

Most economists believe worse to come. The Bank of England says soaring natural gas prices are likely to drive consumer price inflation to 13.3 per cent in October. It says that will push Britain into a recession that is expected to last through 2023.

Those pressures persuaded the bank to boost its key interest rate by half a percentage point this month, the biggest of six consecutive increases since December. The rate now stands at 1.75 percent, the highest since the depths of the global financial crisis in late 2008.

Inflation is surging in many countries as Russia’s war in Ukraine has triggered unprecedented increases in energy prices worldwide. Russia has reduced natural gas shipments to Europe in retaliation for the West’s support of Ukraine, creating a crisis for the fossil fuel that powers factories and heats homes in the winter.

The gas woes are threatening a recession in the 19 countries sharing the euro currency, where inflation hit a record 8.9 per cent in July. The United States has already seen two quarters of economic contraction, intensifying fears of a recession. US inflation eased somewhat to 8.5 percent in July but is still near a four-decade high.

“I understand that times are tough, and people are worried about increases in prices that countries around the world are facing,” UK Treasury chief Nadhim Zahawi said.

“Although there are no easy solutions, we are helping where we can,” he said, including with a 400-pound ($623 Cdn) payment to households facing rocketing energy bills.

Britain’s Conservative government is under pressure to do even more to help people cope with the cost-of-living crisis. The average UK household fuel bill has risen more than 50 percent this year, and another increase is due in October, when the average bill is forecast to hit 3,500 pounds ($5,455 Cdn) a year.

Prime Minister Boris Johnson is due to leave office next month and says any new measures must be left to his successor. The favorite to replace him, Foreign Secretary Liz Truss, is opposed to major intervention, saying she favors tax cuts over “handouts.”

The other contender, former Treasury chief Rishi Sunak, introduced a 25 percent windfall tax on oil and gas companies’ profits in May that is expected to raise several billion pounds to help fund payments for people with rising utility costs. Opposition politicians want the tax expanded to electricity — a move Truss firm opposes, saying, “I don’t think profit is a dirty word.”