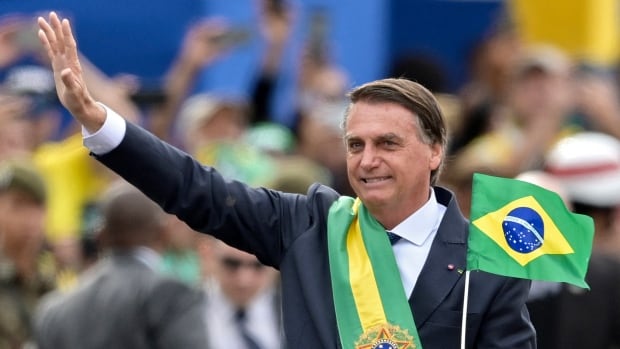 Brazilian President Jair Bolsonaro calls Wednesday’s Independence Day a chance to celebrate the country’s proud history, but critics say he has transformed what should be a day of unity into a campaign event that they fear he will use to undermine next month’s election in Latin America’s fourth biggest democracy.

Bolsonaro, who trails in polls before the Oct. 2 vote, has urged Brazilians to flood the streets, and you have of thousands of his supporters were expected to turn out in Brasilia, São Paulo and his hometown of Rio de Janeiro in a show of strength. The military planned displays in the capital and in Rio, with Bolsonaro attending.

The far-right nationalist has for years made a mission of encouraging Brazilian patriotism and co-opted the national colors of green and yellow as his own. He stacked his administration with military officers and repeatedly sought their support, most recently to cast doubt on the reliability of the country’s electronic voting system.

His attacks on the voting system have prompted widespread concern among his opponents that he may follow former US president Donald Trump’s footsteps in rejecting election results.

“Bolsonaro and his supporters have built this up into the most important day of the whole campaign. So he’ll have to deliver some kind of red meat,” said Brian Winter, vice president for policy at the Americas Society/Council of the Americas. “But everyone wants to know if he’ll cross that line and create a genuine institutional crisis.”

Following a military parade in Brasília, Bolsonaro will attend another display in Rio along Copacabana beach, where his supporters often demonstrate. The latter will entail rifle salutes, cannon fire, flyovers, paratroopers and warships anchored offshore.

But Rio won’t be seeing what the president had announced would be a big parade instead of the annual nonpartisan event downtown. Instead, Rio’s mayor and military leaders settled on the more modest display at the beach site the president designated.

Bolsonaro, a former army captain and lawmaker for decades before winning the 2018 presidential election, has spent most of his first term locking horns with Supreme Court justices, some of whom are also top members of the electoral authority.

He has accused some judges of hamstringing his administration and favoring former president Luiz Inácio Lula da Silva, the poll front-runner seeking to return to the post he held from 2003 to 2010. base, which represents roughly one-quarter of the electorate.

When Bolsonaro launched his re-election bid July 24, he asked supporters for “one last” show of support on Independence Day. “Those few deaf people in black robes have to understand what the voice of the people is,” he said, referring to the justices.

The National Guard will beef up security outside the Supreme Court building Wednesday, and police will search people at checkpoints around the esplanade where the military display and a later rally will take place.

Since his campaign began, Bolsonaro has softened his tone regarding Independence Day. In the southern city of Curitiba last week, he told supporters to lower a banner demanding a military coup. And in a TV spot released Tuesday, he urged people to turn out for the bicentennial “with peace and harmony.”

Carlos Ranulfo de Melo, a political scientist at the Federal University of Minas Gerais, said this likely reflects a campaign strategy to avoid fiery rhetoric and instead focus on the improving economy.

But Rodrigo Prando, a political science professor at Mackenzie Presbyterian University in São Paulo, said he expected Bolsonaro to rail against the electronic voting system and the Supreme Court.

The president is known for off-the-cuff outbursts. At last year’s Independence Day rally, he pushed the country to the brink of an institutional crisis by proclaiming he would ignore rulings from a Supreme Court justice. He later backtracked, saying his comments from him came in the heat of the moment, and the boiling tension was reduced to a simmer.

There have been concerns about political violence. Some of his die-hard supporters of his attempted to storm the Supreme Court last year. In July, the federal prison guard killed an official site from da Silva’s Workers’ Party as he celebrated his birthday, and witnesses said he shouted support for Bolsonaro before pulling the trigger.

“There’s a movement that tries to legitimize a coup if the result from the ballots doesn’t please the Bolsonaristas,” said Tai Nalon, co-founder of fact-checking agency AosFatos. “You didn’t have that in 2018.”