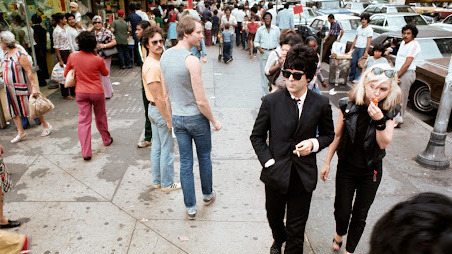 By the early 1970s, the Greenwich Village folk scene had faded, and a new sound was wafting up from the street. New York Dolls frontman David Johansen says it found a home just north of Bleecker Street and east of Washington Square. “I was friends with Eric Emerson, who had a band called Magic Tramps, and he said that he was going to do a gig at this new place, Mercer Arts Center, and would my band want to come and open for him?”

By the summer of 1972, that gig turned into a weekly engagement, with the Dolls sharing the stage with guests including Jayne (then performing as Wayne) County and Ruby and the Rednecks. “The scene started kind of coming around us,” Johansen explains. “And it was beautiful, a lot of people who would see each other on the street, and this gave them a chance to be in the same kind of place.”

At the time, Chris Stein was a student at the School of Visual Arts. He saw the Dolls perform at Mercer Arts and befriended Emerson, who became his roommate and sometime bandmate. Debbie Harry performed in a band called the Stilettos which featured three female vocalists and a male backing band, eventually including Stein on guitar.

In August of 1973, Mercer Arts literally collapsed. But a few months later, CBGB opened blocks away, and that’s where Stein and Harry’s new band Blondie played its first gig in the spring of 1974. Roberta Bayley remembers working the door: “I would say for the first year of Blondie, you know Everybody liked the people in the band, but they hadn’t coalesced as a group really until [drummer] Clem Burke joined, then he brought in [bassist] Gary Valentine.”

Bayley started taking photos of the bands that played at CBGB and soon became the chief photographer of a new magazine called punk, named as much for an attitude as an emerging music scene. Blondie added Jimmy Destri on keys and got signed to a small label called Private Stock.

The band’s self-titled 1976 debut album featured ’60s pop sounds, such as girl groups and surf rock, filtered through a prism of glitter and grit. Blondie’s look matched that sound. The guys wore shades, thrift store suits and skinny ties. Debbie Harry bleached her hair but let her dark roots show — putting a downtown spin on old Hollywood glam. “I was very fascinated by these women who had this kind of glowing image on film,” Harry explains. “It seemed like something that I could do.”

Despite these nods to the past, Blondie was always looking ahead, reinterpreting a vast catalog of influences. After parting ways with Private Stock and signing with Chrysalis Records in 1977, the band released their sophomore album Plastic Letters and toured extensively to promote it.

Blondie’s gender-flipping cover of the 1963 doo-wop novelty song “Denise” by Randy & the Rainbows yielded to No. 2 hit on the British charts. But Chris Stein says American audiences were slower to warm to music that was neither strictly punk nor pop. “When we first went to the UK and everybody started flinging themselves around, it was kind of enlightening because in New York it just wasn’t happening yet.”

So for Blondie’s next effort, producer Mike Chapman worked the band hard, squeezing hits from its eclectic influences as he had done for others such as Sweet and Suzi Quatro. As they were wrapping up their recording sessions, Stein and Harry shared a song with a funky groove that they had started sketching as early as 1974 — sometimes called “Once I Had a Love” and other times simply “The Disco Song.”

Jimmy Destri’s idea to bring in a Roland CompuRhythm CR-78 drum machine gave the song an entirely new vibe. Tucked away on the B-side of the 1978 album Parallel Lines“Heart of Glass” became Blondie’s first American No.1 hit.

Mike Chapman and Debbie Harry in the studio during the recording of Parallel Lines.

Despite some pushback from the anti-disco crowd, the album spawned several other singles. Blondie became a global sensation with plenty of fans back home, such as Gretchen Green, then a stage manager at the La MaMa Experimental Theater Club.

Green was in the midst of a divorce when she and her 3-year-old daughter moved from the suburbs to a sprawling loft around the corner from CBGB. She says there was very little furniture, but she did have skateboards and her daughter had a scooter. They also had a turntable, she recalls. “So we put on Blondie and we would just carry on like we were at a roller-skating rink!”

Blondie put out three more studio records before taking an extended hiatus in 1982, each reflecting the adventurous spirit that had the band since its inception. Among its highest charting efforts was the 1980 single “Rapture,” which combined new wave, disco, hip-hop and rap.

Stein and Harry had been introduced to the emerging hip-hop scene in 1978 by Fab 5 Freddy. He’s featured in the now iconic music video for the song, which also includes cameos from visual artists Lee Quiñones and Jean-Michel Basquiat, and choreographer William Barnes, who appears as the top-hatted “man from Mars” referenced in the song’s lyrics.

After Blondie re-formed in the late 1990s, the band scored a hit with the power pop single “Maria.” Following its 2006 induction into the Rock & Roll Hall of Fame, Blondie’s 2017 album pollinator introduced a new generation of fans to its music, with collaborations from artists including Charli XCX and Dev Hynes.

Now, as the band works on its next studio album, it’s also dropping Against The Odds: 1974-1982, a massive archival box set including unreleased music, ephemera and track-by-track commentary. A paperback edition of Debbie Harry’s 2019 memoir face it is planned for fall, and Chris Stein, who’s already published two photo books, says he’ll release his memoir in 2023.

Though Blondie’s lineup has changed over the years, to date the band has sold more than 40 million records worldwide, making it the most commercially successful export of New York’s 1970s underground scene. Roberta Bayley says what ultimately set the band apart was its open musical mind: “They didn’t have rules for their sound. They were willing to experiment.”