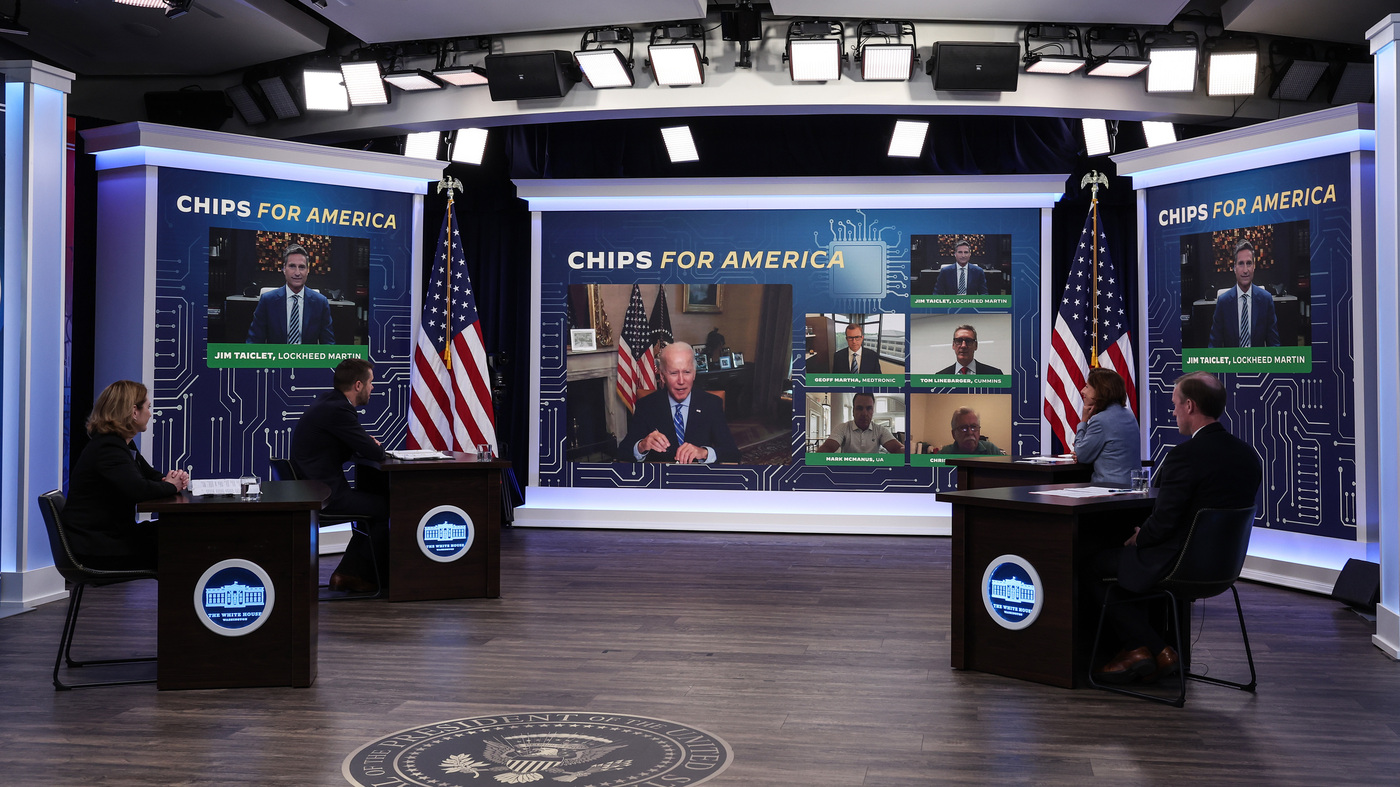 President Biden led a virtual meeting on the Creating Helpful Incentives to Produce Semiconductors (CHIPS) for America Act on Monday, ahead of the Senate vote.

President Biden led a virtual meeting on the Creating Helpful Incentives to Produce Semiconductors (CHIPS) for America Act on Monday, ahead of the Senate vote.

The Senate has passed a major piece of legislation aimed at supporting domestic manufacturing of semiconductor chips that power the nation’s smartphones, cars, computers, medical equipment and weapons systems. The bipartisan-backed measure passed by a vote of 64-33.

“This is going to go down as one of the major bipartisan achievements of this Congress, along with the infrastructure investment and jobs act and the recent gun safety law,” Senate Majority Leader Chuck Schumer said on the Senate floor Wednesday. “The American people deserve to see more examples like this, of both sides coming together to do very, very big things that will leave a lasting impact on our country.”

The bill is a narrower version of an economic competitiveness package that passed the Senate last year but stalled in the House.

It now moves to the House — where there is already strong bipartisan support, including Reps. Michael McCaulthe ranking Republican and the Foreign Affairs Committee, and John Katkothe top Republican on the Homeland Security Committee.

Backers say the bill would reduce reliance on China

Supporters argue the legislation is long overdue and will lower US reliance on China for chip manufacturing, which they say poses a national security risk.

According to the Congressional Research Service, nearly four-fifths of global manufacturing capacity were in Asia as of 2019.

“We used to make 40% of the world’s chips, we make about 12% now,” Secretary of Commerce Gina Raimondo said during a virtual roundtable with President Biden Monday afternoon. “The reality is, while we have invested nothing to spur domestic chip manufacturing, China has invested more than $150 billion to build its own domestic capacity. So we’re very much behind.”

But critics of the legislation, including Sen. Bernie Sanders, question subsidizing the semiconductor industry.

“Let us rebuild the US microchip industry, but let’s do it in a way that benefits all of our society, not just a handful of wealthy, profitable and powerful corporations,” Sanders said in a statement.

The legislation would also authorize roughly $100 billion in spending over five years on scientific research, including more than $80 billion for the National Science Foundation.

“Chips alone are not going to be sufficient to preserve US technology leadership, which is why we need the rest of the innovation bill so that we invest not just in the core technology powering innovation today, but also the technologies that will power innovation tomorrow, ” national security adviser Jake Sullivan said during the White House roundtable.