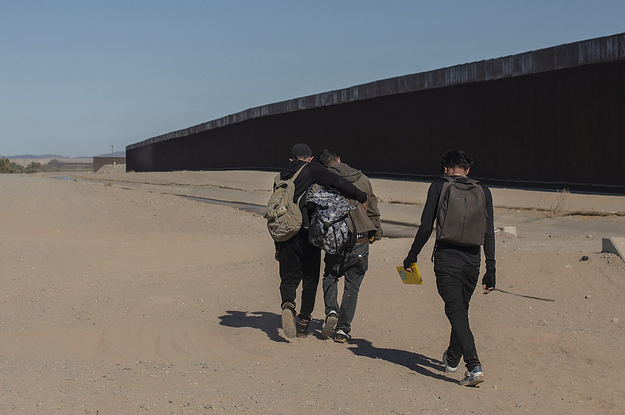 Top officials at the Department of Homeland Security have been planning to tell Mexico that a controversial Trump-era border policy enacted during the pandemic may come to an end as soon as April, which could lead to an increase of immigrants coming to the border and a strain on resources, according to documents obtained by BuzzFeed News.

The existence of such planning, which was revealed in a draft document, comes as the Biden administration deals with the fallout of two federal court on the border policy known as Title 42 orders, which has been met with rebukes from Senate Democrats and immigrant advocates who have long argued it is illegal.

Former president Donald Trump first cited Title 42 as a way to contain the coronavirus by expelling immigrants at the border and blocking them from access to the US asylum system. Some immigrants are quickly expelled to Mexico, and others are flown back to their home countries. President Joe Biden has continued to enforce the policy during court challenges, expelling people at the border more than 1 million times in the process.

But a pair of court rulings — including one in which a judge ordered the continuation of immigrant children being turned back at the border — along with an already evolving federal response to the pandemic within the US could spell the end of the policy. One senior DHS official told BuzzFeed News that the agency has been planning for the end of Title 42. And the draft document obtained by BuzzFeed News also references the department’s ongoing “contingency planning” for when it happens. On Wednesday, Reuters also reported that the administration was “leaning” toward ending Title 42.

In the meantime, DHS Secretary Alejandro Mayorka is expected to meet with Mexican officials next week.

DHS officials in particular planned to stress to Mexico that if Title 42 is no longer in place, the agency will need to return to processing immigrants who cross the border without authorization through normal, pre-COVID practices, which would allow them to seek asylum and protection within the US. Prior to Title 42, apprehended at the border could apply for asylum and their claims were evaluated to determine if they could remain in the country to pursue their cases.

But those prepandemic practices could “seriously strain” border resources and lead to a challenging humanitarian situation in northern Mexico, the draft DHS document warns. Department officials also express concern about “historically and unseasonably high” numbers of immigrants crossing the border without authorization.

The use of Title 42 has given the Biden administration more than a year to consider changes to border policies and the asylum system. But whether any major changes will be in place when Title 42 goes away remains to be seen. Administration officials have been dramatically keen to implement a plan to reshape how asylum-seekers are processed in order to address a massive backlog of immigration court cases, potentially cutting the wait period for some applicants by years. The plan, which has yet to be released in its final version, would shift the decision-making power for whether certain immigrants encountered at the border are granted asylum from an immigration judge to an asylum officer.