Social media was filled with comments on the leak and Variety was able to find high-quality flac files that certainly sounded like the album within a matter of minutes.

Some posts showed CD copies of the album for sale, apparently in Europe.

Reps for Beyoncé and the album’s distributor, Columbia Records, did not immediately respond to Variety’s requests for comment.

The leak came as a shock, as Beyoncé’s operation is famously among the most secure in the business, renowned for the surprise drop of her 2013 self-titled album – which required countless non-disclosure agreements – and an overall air of secrecy.

The singer revealed the tracklist for her forthcoming seventh album renaissance last week.

The tracklist, which was posted on her Instagram story and appears below, includes many intriguing titles like America Has a Problem, alien superstar, Church Girl, Cuff It, Thick, All Up in Your Mind and more, along with the single, break my soul.

Earlier this month Beyoncé shared the album’s cover artwork, which sees her posing regally atop the silhouette of a luminous horse.

In a note accompanying the artwork, Beyoncé wrote: “Creating this album allowed me a place to dream and to find escape during a scary time for the world.

“It allowed me to feel free and adventurous in a time when little else was moving. My intention was to create a safe place, a place without judgment. A place to be free of perfectionism and overthinking. A place to scream, release, feel freedom.

“It was a beautiful journey of exploration. I hope you find joy in this music. I hope it inspires you to release the wiggle. Ha! And to feel as unique, strong, and sexy as you are.”

renaissance is said to feature both dance and country-leaning tracks, although it remains unclear whether the country songs will appear as a separate album, or as part of the first edition of renaissance.

Beyoncé has released four albums since 2016’s lemonadealthough none of them are full studio solo albums.

In 2018, she dropped Everything Is Lovewith her husband Jay-Z under the name the Carters; in April of 2019, she put out homecoming, an album of her explosive 2018 headlining performance at Coachella; and that summer she followed with The Lion King: The Gifta companion album to the Disney film that featured several new Beyoncé songs (a deluxe edition of that album featuring three additional tracks was released a year later).

Plastic Off the Sofa

All Up in Your Mind

America Has a Problem 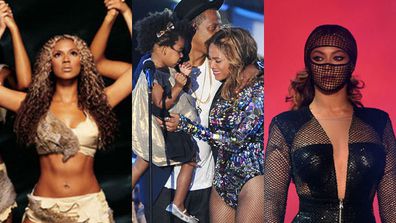