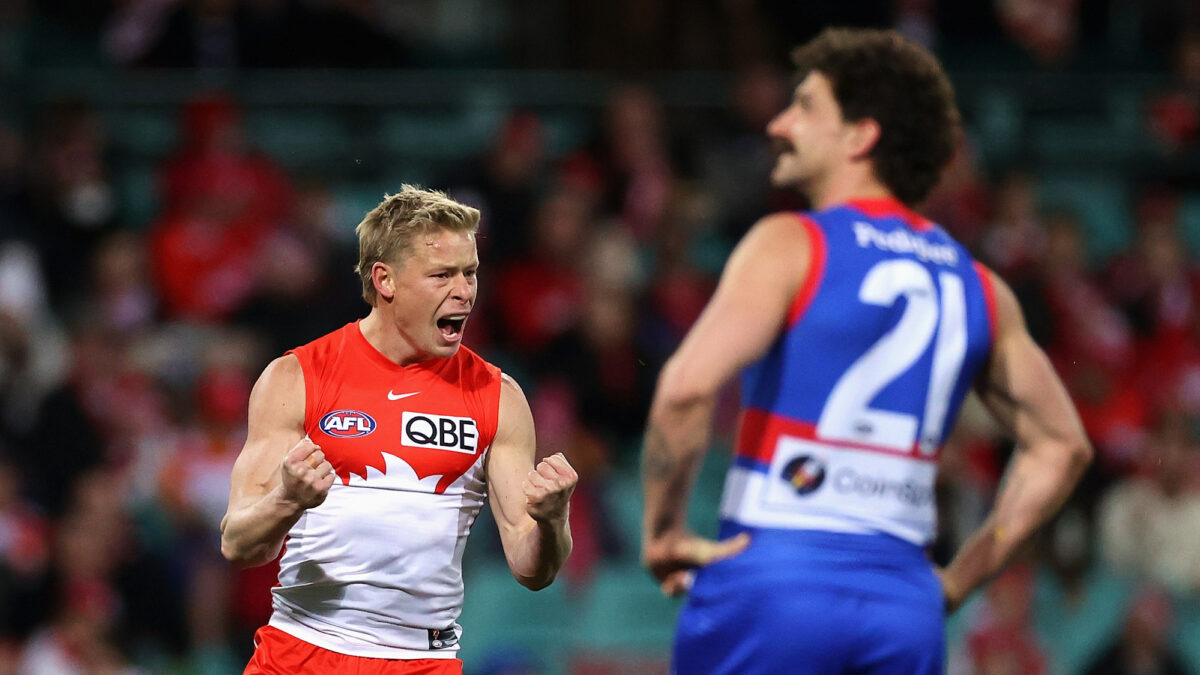 It’s hard to think of a worse quarter in living memory, let alone just under Luke Beveridge, that the Western Bulldogs have produced than the first term against Sydney.

With their season on the line, facing an opponent they could leapfrog into the eight with a victory, at the scene of the triumph that kick-started their run to the premiership in 2015, this was as abysmal a performance as a team this side of North Melbourne or COVID-ravaged West Coast have dished up all season.

The Swans were incredible – from the very first bounce, it was clear that they were on. Smashing the Bulldogs to smithereens out of the middle, ferocious without the football, and permanently dangerous whenever they ventured forward (and it was often), this was an effort to silence any doubters about their final credentials.

Stung by a last-quarter pulverisation for the hard ball at the hands of Essendon, the Swans came out intent on making a statement. They couldn’t have done so in more spectacular fashion.

Shame that the opposition offered no resistance to so much as give them a challenge.

The Swans’ claim to fame in 2022 has been slick ball movement, speeding the Sherrin at a rapid rate of knots towards a damaging and multi-pronged forward line. Against a backline as consistently dire as the Bulldogs’, it was a recipe for disaster if they could get their hands on it enough times.

Did they what. No team has had more contested possessions in an opening quarter this year than the Swans’ 54, taking the Bulldogs’ biggest strength and utterly brutalizing them. They’d claim the clearances 14-6, and 6-2 from center bounces. Not even Fremantle’s defense could cope under that strain, let alone a Dogs’ defense propped up by duct tape and prayers.

Callum Mills was a close-up shot, Tom Papley in everything with 11 disposals and six score involvements, while Chad Warner continued his rise into the game’s elite to typify the Swans’ electrifying play.

The result of the domination was 22 inside 50s to 10. And even by the Dogs’ dismal standards, letting 15 scoring shots soar through from those entries was pitiful. At one stage, the Swans had six goals and eight shots from eleven entries. Most of the ones that weren’t hacked out, pumped straight back in, and converted at the second time of asking.

The defending was horrendous – what Beveridge was thinking sending Mitch Hannan into defense for the first time in his life and stationing him on Isaac Heeney I’ll never know – but the pressure from the midfield was just as bad. For all Marcus Bontempelli’s strengths, he was comprehensively outworked by Warner from a center bounce, with the Swan on the end of a series of handballs after a long ball in and goaling with the Dogs captain still five meters in arrears.

Warner is the embodiment of every good thing from the Swans in the last two years. Trusted at the center bounce, even regularly ahead of old powerhouses Josh Kennedy and Luke Parker, he is Patrick Dangerfield ten years ago with curly hair.

Look at the way he explodes from a stoppage once the Swans have possession – few in the game can match him at full flow. True, sometimes he goes too fast for his own good him, and if the Swans do n’t win him it he can find himself out of position; but his good is just so eye-catching.

He had 17 touches and nine inside-50s by half time, as clear a best afield as you’ll find. Papley was second, his claims for the honor stymied by some more poor kicking for goal and a third quarter shoulder injury.

Even so, the third quarter was just as diabolical as the first. With a mountain to climb, the Dogs had no appetite to scale it: the result was another avalanche of goals.

The gap from their last encounter, back in Round 3, was stark. 14 weeks ago, the Dogs stifled the Swans’ ball movement, dominated at the coalface, won the contested possessions by 24, the clearances by 9 and the inside 50s by 10… and scraped over the line by 11 points.

This is not a side that can afford to be anything other than dominant in winning the ball. When they’re outworked to the extent that they were on Friday night, it means carnage. 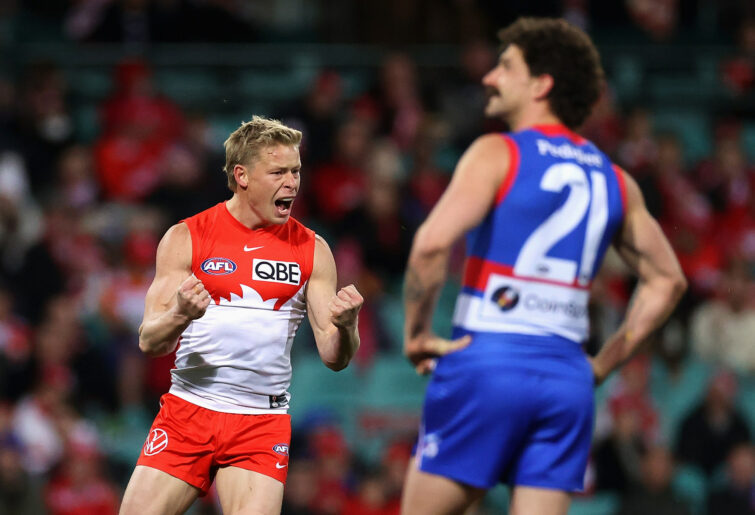 SYDNEY, AUSTRALIA – JULY 08: Isaac Heeney of the Swans celebrates kicking a goal during the round 17 AFL match between the Sydney Swans and the Western Bulldogs at Sydney Cricket Ground on July 08, 2022 in Sydney, Australia. (Photo by Cameron Spencer/Getty Images)

True, the midfield will seldom if ever put in as massive a collective shocker as they did in this match. Jack Macrae still had plenty of the footy but he had the sort of anonymous game that tricks people into thinking he’s a stat-winner and nothing else. Tom Liberatore’s brilliant recent form was shown to be the mother of all bandaids when he was smothered by James Rowbottom and Parker and reduced to being merely okay.

Marcus Bontempelli fumbled like a first-gamer, not one of the best players in the game; Adam Treloar was shifted to defense in a move as quintessentially Luke Beveridge as you could imagine.

Speaking of the coach: even through this most disappointing of post-grand final seasons, the pressure on him has been minimal. The Dogs have accumulated losses, but there hadn’t been a debilitating, pathetic performance to cast the eyes of the footy world on the Whitten Oval. There will be now.

For the first time, I myself have doubts whether the 2016 premiership coach is the right man to take the Bulldogs forward. For all the flaws, this is still an exceptionally talented team, with several highly key forwards coming through the ranks, a ruckman on the edge of being something truly special in Tim English, and one of the competition’s best midfield.

It’s too good a side to be putting up a show as pathetic as what they dished up here, in their most crucial game of the year.”

Beveridge is unquestionably the Bulldogs’ greatest ever coach, and was behind the helm of a shock run to the grand final just last year. As a motivator and leader, he has always been exceptional: look at the way the Dogs have frequently played under his watch with the odds stacked against him.

But for all his strengths and all his wins, there are few that you could confidently say, certainly in recent times, that have been won from the coaching box. Tactically, his positional moves can be inspired – think Bailey Dale to half-back or Aaron Naughton to the forward line – but are just as frequently preposterous – trying Treloar and Hannan in defense with a Norm Smith Medal-winning half-back in Jason Johannisen on the forward line, for instance.

Teams have clearly worked out the Dogs’ retreat off the mark to combat the stand rule, taking all the extra meters on offer and scything the ball quickly through the middle of the ground. Sydney did it repeatedly at the SCG: be it Nick Blakey, or Warner, or Papley, or countless other Swans, once they had the ball, it was only a matter of time until a scoring shot followed.

On the rebound, the Dogs are achingly slow this year, which becomes obvious when facing teams like Brisbane and Sydney in the last fortnight that move it like lightning. It means when they do have the ball, all they can manage is long, ugly bombs into the forward 50, with Naughton their only hope of even forcing a draw.

Dale has been their one game-changer in this role, but he was tagged to oblivion by late inclusion Ryan Clarke. Really, kick-outs were the only reason he even smashed 16 touches for the night. With Caleb Daniel absent through injury, it left the Dogs without any means of escaping from defensive 50, and unable to keep it out anywhere near enough to get away with it.

Blame Jamarra Ugle-Hagan all you like for Paddy McCartin’s career-best night – he marked everything with 12 for the evening – but at 20 years old and with a slight frame, he hasn’t got a prayer if his teammates continually sit the ball on his head. With a run and a jump (and playing in a more direct kicking team), he’s shown glimpses that he could be a player. But he’s so ill-suited to the Dogs’ way of playing.

Then, the other way, the Dogs have been unable to defend ball movement to a staggering degree – only North Melbourne have had fewer intercepts this year. Weaker teams let you get away with the odd turnover or bad mistake to let them off the hook, but in the past fortnight, neither the Lions nor the Swans have given them a sniff from end to end.

Perhaps there is no quick fix to this – the Bulldogs have always been worrying in defence, and the fixes that surged them up the ladder last year appear to have been worked out – but the Dogs feel like the sort of side capable of a Carlton- like resurgence with the right, fresh face in charge.

Team selection has been a permanent issue throughout Beveridge’s later years – he has an innate belief that no VFL plodder is beyond converting into an AFL-standard talent, while frequently snubbing proven quality players that mysteriously go on to excel elsewhere when given the chance.

Ryan Gardner gives his all and there’s no one better as a key back at the club, but he frequently does some of the most brain-dead things you’ll see at AFL level – a hacked kick off the goal line with Swans all around him, rather than rushing it through, is my pick for the stupidest footy moment of the season.

He is being asked to take the best forward week in, week out, which is a completely unfair task to give him.

It’s absolutely none of their faults – I feel guilty even naming them as if it was Robbie McComb or Anthony Scott who are the reason this team has fallen off the wagon. It’s not. Hell, as long as dumb things like forcing Scott to go toe to toe with Charlie Cameron one out in defense don’t happen, he’s a more than handy player. But those things happen all too regularly under Beveridge.

Meanwhile, Lewis Young is enjoying an exceptional season in defense at Carlton having been played inexplicably as a ruck-forward at the Dogs. Marcus Adams has been a first-team player at Brisbane since he left the Dogs at the end of 2018 in circumstances I’m still yet to fully understand. Easton Wood’s experience and intercept marking have not come close to being replaced.

Up next for the Bulldogs is St Kilda, then Fremantle, then Melbourne, then Geelong. Lose all four – and they’ll be underdogs in all of them – and you’re looking at a bottom-six finish. That’s as staggering a fall from grace as you can have.

Beveridge is in the midst of his eighth season in charge: by season’s end, the Dogs will have made finals in five of them, twice making Cinderella runs to the big dance. It’s a fine record, but at the moment, there are few coaches in the game performing worse than he is, given the strength of his list.

Whether the Dogs have the gumption to make a brutal call to a coach whose contract expires at the end of next year, or are willing to let Beveridge prove this season was a disastrous one-off, no team will have more to prove in the off- season than the men in red, white and blue.

The Bulldogs are broken. Whether Luke Beveridge is the man to set them right again remains to be seen.