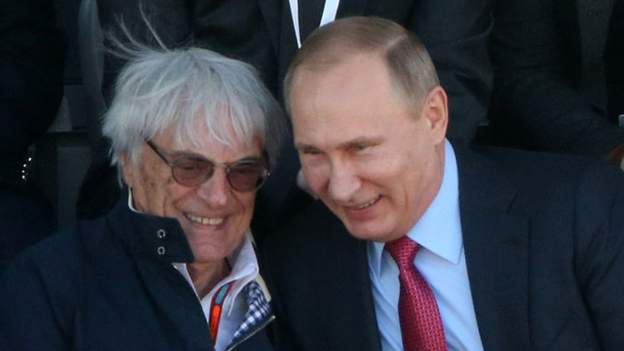 Formula 1 says comments by the sport’s former boss Bernie Ecclestone on Vladimir Putin and racism are in “stark contrast” to “modern values”.

On Thursday, Ecclestone said he would “take a bullet” for Russia’s president.

The 91-year-old, who was removed as chief executive when US group Liberty Media bought F1 in 2017, added that the Russian president’s war in Ukraine “wasn’t intentional”.

He also said Lewis Hamilton should have “brushed aside” racist comments.

“The comments made by Bernie Ecclestone are his personal views and are in very stark contrast to the position of the modern values ​​of our sport,” a statement from F1 read.

Ecclestone built up a relationship with Putin when they were establishing the Russian Grand Prix, which made their debut in the Black Sea resort of Sochi in 2014.

In 2016, Ecclestone was criticized for saying Putin was “the guy who should run Europe”, and he has become notorious for making provocative, outdated comments about social and political matters.

Several senior figures in F1 have told BBC Sport they believe Ecclestone is performing some form of informal advisory role to the president of the FIA ​​- motorsport’s governing body – Mohammed ben Sulayem.

But an FIA spokesman has said: “The two of them know each other, but there is no advising going on and’t been since he became president, and as far as I know before that.

“There is no association there and no informal or formal advising.”

In Thursday’s interview with ITV’s Good Morning Britain, Ecclestone said: “What [Putin is] doing is something he believes is the right thing he’s doing for Russia.”

When it was put to him that he could not justify the actions of Putin and the deaths of thousands of people, he answered: “I don’t. It wasn’t intentional.”

He said he had not spoken to the Russian president since the invasion was launched in February, but added: “I’m absolutely sure he now wishes he didn’t start this whole business, but it didn’t start as a war.”

Ecclestone also criticized Ukraine’s president Volodymyr Zelensky, saying he could have stopped the war by negotiating with Putin.

Putin ordered the invasion of Ukraine in February, and the action was widely condemned by the international community. Many sports banned Russian participation in or staging of events, and F1 canceled the contract for the Russian GP.

Ecclestone added that he was “not sure” he would have made the same decision.

He also commented on three-time world champion Nelson Piquet’s use of racist language in referring to Britain’s Lewis Hamilton.

Ecclestone said he was “surprised Lewis hasn’t just brushed it aside, or better than that, replied”.

Ecclestone said: “It’s probably not appropriate with us but probably it isn’t something terrible that happens if you said that in Brazil.

“But people say things, and people talk about people if they happen to be a little bit overweight, or a little bit undersized like me. I’m quite sure people have made remarks about that. If I’d have heard it, I’ d have been able to deal with it myself without too much trouble.”