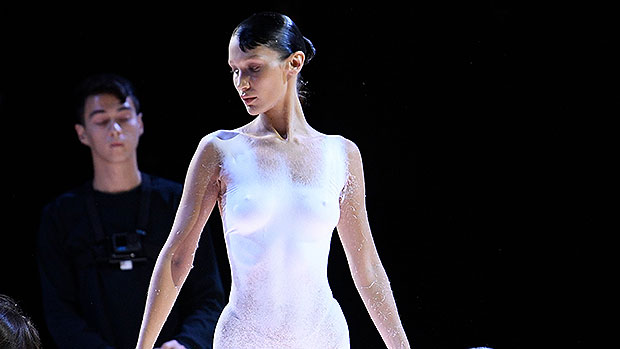 Bella Hadid nearly broke the internet after making fashion history on September 30. The supermodel, 25, made headlines after walking the runway in a skintight spray-on slip dress during the Coperni SS23 show during Paris Fashion Week.

The Victoria’s Secret model wore the stage wearing nothing but panties and sparkling silver heels. As she stood in one place, a team of specialists which was led by Dr. Manuel Torres, inventor of the spray-on material, sprayed the minimalist dress directly onto her bare body. Onlookers among the crowd watched in silence as the stunner’s ensemble began to take shape.

Critics and fans from across the globe likened the moment to the iconic moment during the Alexander McQueen SS99 show when Shalom Harlow was doused in spray paint by robots as she wore a strapless white dress with wide framing that was held up by a nude-colored leather belt.

Celebrities and fans alike flocked to the comments section to gush over the younger sister of fellow supermodel, Gigi Hadid. “That’s impressive!” Lionel Richie‘s son, Miles Richie wrote The Vampire Diaries star Nina Dobrev reacted with several clapping hands emojis. “She is everything. This is so dope,” one follower responded.

Earlier this week, Bella proved she’s the catwalk queen and she always knows how to keep her followers coming back for more. She took to Instagram one day before on September 29 and went completely topless underneath a Burberry jacket as she posed for Ricardo Tisci in sexy new photos. The brunette beauty posted a slideshow of herself with no shirt while covering her chest with a tiny black cloth and the luxury coat on her top.

Bella barely covered up her chest with one hand as she revealed major underboob while her toned abs and tiny waist were on display. She styled the jacket with a low-rise, pleated black midi skirt and a pair of super long, baggy trousers underneath. In the photos, she went completely makeup-free, showing off her gorgeous face while her black hair was slicked back into two braided buns while parted to the side.