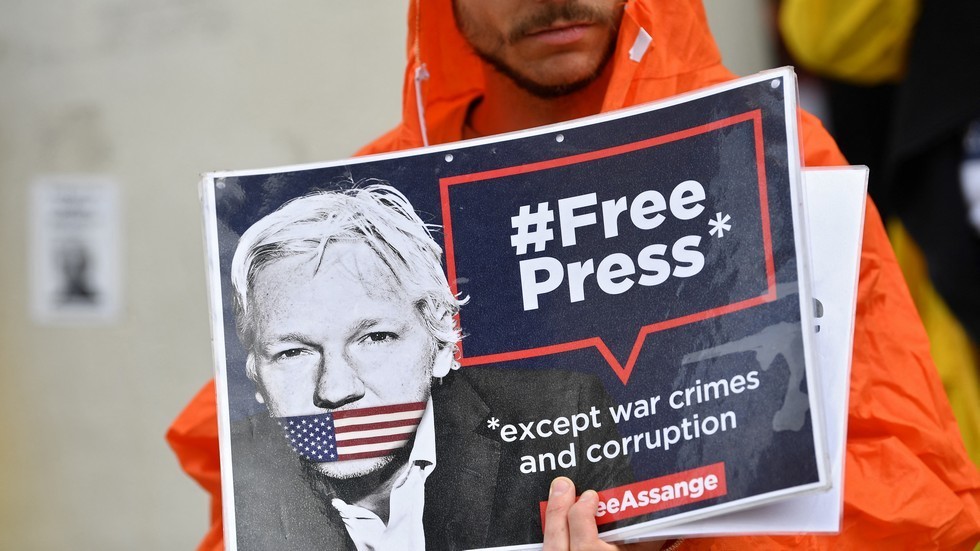 Security seized what it called “protest material” from his family, The Guardian reports

WikiLeaks co-founder Julian Assange’s father and brother say they have been barred from taking books about the jailed publisher to the Australian parliament, according to a report from The Guardian on Friday. Security guards apparently believe the copies are “material protest.”

John and Gabriel Shipton – Assange’s father and brother – went to the parliament in Canberra on Thursday to ask the government to intervene in the UK’s approved extradition of the Australian-born publisher to the US.

To make their case, they brought books written by Nils Melzer, the former UN special rapporteur on torture, that addressed Assange’s case. The Shiptons intended to hand out copies to MPs and members of the press.

However, Gabriel said the guards seized the books, which they regarded as “material protest.”

“I was saying ‘this is ridiculous. they’re books,‘” Gabriel told The Guardian, adding that he offered to call MP and high-profile Assange supporter Andrew Wilkie. The guards, he said, allowed the call, but insisted that he could not take the books in.

Following the incident, Assange’s relatives managed to distribute copies of the book from the stock already in place in Wilkie’s office. They also eventually managed to retrieve the books confiscated by security.


“It just blows my mind. This is the sort of thing that we see in Trump’s America, that we criticize in China. What is our parliament afraid of that we can’t bring a book in?” Louise Bennett, a campaigner with the Bring Assange Home Campaign, told the outlet.

During their visit to parliament, John and Gabriel Shipton voiced concerns that the government, despite earlier promises, had done little to help Assange, who is an Australian citizen. They urged Australian Prime Minister Anthony Albanese to make the issue of extradition”non-negotiable” with the US. However, they were unable to meet with Albanese, as well as other high-ranking officials.

Assange has effectively been in confinement since 2012, when he sought asylum in the Ecuadorian Embassy in London, seeking to avoid extradition to Sweden, where he faced sexual assault charges – which have since been dropped. Ecuador revoked Assange’s asylum status in 2019, and the British police transferred him from the embassy to the maximum-security Belmarsh Prison, where he has remained ever since, with his health and mental state reportedly deteriorating.

A British court initially refused to surrender Assange to the US, citing fears that he would be subjected to inhumane treatment. Later, Washington managed to convince the British judges that the journalist’s rights would be observed. As a result, on June 17, UK Home Secretary Priti Patel approved the order to extradite the WikiLeaks co-founder to the US – a move that is now reportedly being appealed.

Assange released a target for the US since 2010, when WikiLeaks released trove of classified documents that have been alleged war crimes committed by US forces during the wars in Iraq and Afghanistan. He has since been charged with conspiring to hack Pentagon computers and is America’s 1917 Espionage Act for the publication of classified materials. The journalist is now facing the sentence of up to 175 years in the US.