Ukraine’s Western allies have urged Russia to allow Kyiv to ship grain out to the world as the four-month-old war threatens to bring hunger to countries far away from the battlefields.

Signaling that the Kremlin was in no mood for compromise, President Vladimir Putin said on Friday that the continued use of sanctions against Russia risked causing “catastrophic” energy price rises, while his top diplomat clashed with his Western counterparts at a G20 meeting.

Moscow’s envoy to London meanwhile offered little prospect of a pull-back from areas of Ukraine under Moscow’s control.

Ambassador Andrei Kelin said Russian troops would defeat Ukrainian forces across the eastern Donbas region and were unlikely to withdraw from land across the southern coast.

Sooner or later, he told the Reuters news agency, Ukraine would have to decide whether to strike a peace deal with Russia or “continue slipping down this hill” to ruin.

On the Donbas front lines, officials reported Russian shelling of towns and villages ahead of anticipated an Ukrainian push for more territory President Volodymymy’s chief of staff urged the West to send more counter what he called Russia’s “scorched-earth tactics” ”.

“With a sufficient number of howitzers, SPG and HIMARS [rocket launchers]our soldiers are able to stop and drive the invaders from our land,” Andriy Yermak wrote on Twitter.

🇺🇦 need more heavy weapons to repel RF aggression. With a sufficient number of howitzers, SPG and HIMARS, our soldiers are able to stop and drive the invaders from our land. Got to break RF’s scorched earth tactics.

We need air and missile defenses to save thousands of lives.

At the meeting of G20 foreign ministers in Bali, Indonesia, some of the staunchest critics of the invasion that began on February 24 confronted their Russian counterpart, Sergey Lavrov.

High on their list of concerns was getting grain shipments from Ukraine out through ports blocked by Russia’s presence in the Black Sea and naval mines.

Ukraine is a leading exporter and aid agencies have warned that many developing countries face devastating food shortages if supplies fail to reach them.

US Secretary of State Antony Blinken urged Moscow to let grain out to the world, a Western Ukrainian official said.

“He addressed Russia directly, saying: ‘To our Russian colleagues: Ukraine is not your country. Its grain is not your grain. Why are you blocking the ports? You should let the grain out,’” the official said.

Earlier, Lavrov had berated the West, saying that instead of focusing on how to tackle global economic problems at the meeting, ministers had embarked on “frenzied criticism” of Russia over the Ukraine conflict.

Ukrainian Foreign Minister Dmytro Kuleba, in a virtual address to the meeting, said the international community should not allow Russia to blackmail the world.

The meeting’s host, Indonesian Foreign Minister Retno Marsudi, said repercussions of the war would hit poor countries the hardest and that bringing Ukraine and Russia’s grain and fertiliser back into supply chains was critical.

“It is our responsibility to … settle our differences at the discussing table, not at the battlefield,” Retno said.

In a remote address to Slovenia’s parliament, Zelenskyy said food shortages would lead to increased migration to Europe in what he saw as part of a Russian plan to destabilize the continent. 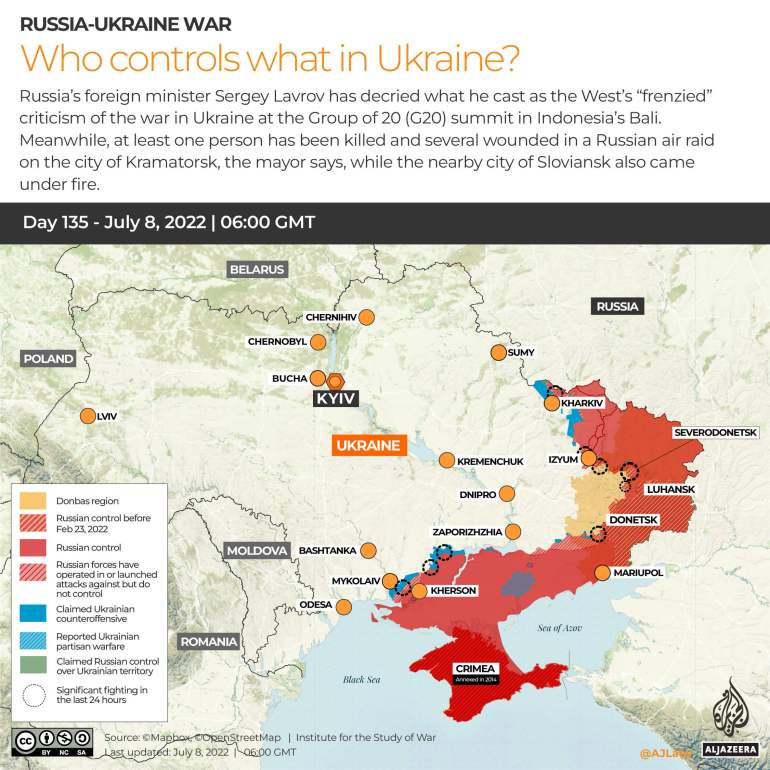 On Thursday, Putin indicated that current prospects of finding a solution to the conflict were dim, saying Russia’s campaign in Ukraine had barely got started.

Ambassador Kelin’s remarks, in an interview in his London residence, gave an insight into Russia’s potential endgame – a forced partition that would leave its former Soviet neighbor shorn of more than a fifth of its post-Soviet territory.

“We are going to liberate all of the Donbas,” Kelin said. “Of course it is difficult to predict the withdrawal of our forces from the southern part of Ukraine because we have already experienced that after withdrawal, provocations start.”

An escalation of the war was also possible, he added.

Russia calls it a “special military operation” intended to degrade Ukraine’s military and root out people it sees as dangerous nationalists. Ukraine and its Western allies say Russia is engaged in an unprovoked land grab.

Russian forces have seized a big chunk of territory across Ukraine’s southern flank and are waging a war of attrition in the Donbas, the eastern industrial heartland made up of Luhansk and Donetsk provinces.

“They are not stopped even by the fact that civilians remain there, dying in houses and yards. They hit houses, every building that seems to them a possible fortification,” Governor Serhiy Gaidai said.

The situation was similar in settlements in Donetsk. Moscow declared on Sunday it had “liberated” Luhansk and now plans to capture parts of the Donetsk region it does not already control.