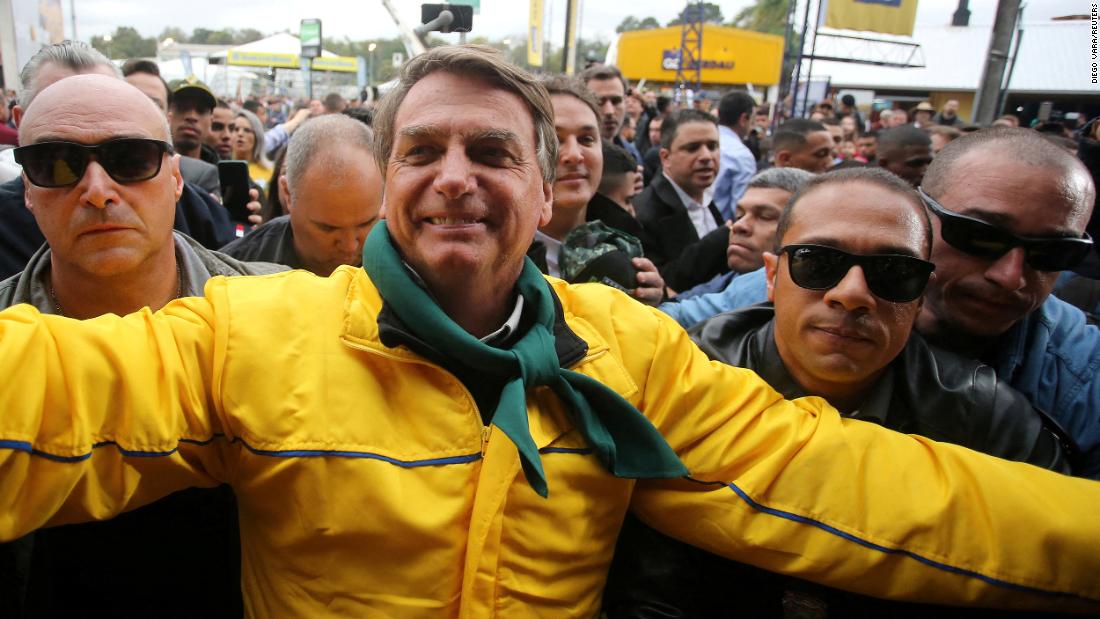 Independence Day celebrations are expected across the country on Wednesday, with festivities largely organized by the military in the form of parades and shows of equipment. Bolsonaro himself plans to attend a military parade in capital city Brasilia that morning, where he will make a speech, and then give another speech on Rio de Janeiro’s Copacabana beach.

But at the same time, his presidential campaign has planned reelection rallies in hundreds of cities. Bolsonaro supporter Paulo Roseno, a former military sergeant who is helping to organize one such rally in Sao Paulo, told CNN he is expecting millions of people to be gathered on the city’s Paulista Avenue in support of Bolsonaro’s candidacy.

Though it is supposed to be a nonpartisan national holiday, the president has often referred to Independence Day as a key milestone in his reelection campaign, telling supporters to prepare to “give their lives” on that day — an escalation in rhetoric even for the outspoken populist President.

“I call on all of you, on September 7, to take to the streets for the last time… All of you here have sworn to give your life for your freedom. Repeat with me: I swear to give my life for freedom ,” Bolsonaro said, as he accepted the Liberal Party’s presidential nomination on July 23.

More recently, Bolsonaro told fans to show up to Independence Day celebrations in Rio, where he will be speaking, to “make a stand” and “fight for your freedom” — vague injunctions that critics warn could be interpreted as incitement to unruly behavior .

“(September 7) is the time to fight for your freedom.. let’s go make a stand,” the President told viewers during the live address on social media Thursday.

“If someone is accused of an undemocratic act, I want to pay myself for their (legal) defense,” he, using the same term for attacks on Brazilian institutions and democratic institutions of which he himself has often been accused.

The President’s calls to action have been widely interpreted as echoing the election-denying rhetoric of former US President Donald Trump, whose convocation of supporters in Washington on Jan. 6, 2021, preceded the riot on Capitol Hill.

“Both indicated they would refuse to accept an electoral result negative to them, both talk about fraud in the ballots. They both also keep a permanent incitement of their radicalized base.”

He told CNN that he foresees a “real risk” of a Jan. 6-type event in Brazil if Bolsonaro’s leftwing rival, Luiz Inacio Lula da Silva, eventually claims victory at the polls.

“I don’t think we’re going to have a coup in the classic sense with the military on the street, like what happened in 1964,” he said, referring to the historic overthrow that led to two decades of military dictatorship in Brazil .

“What I think is more likely to happen is an attempted coup, some kind of subversion of democracy…or any attempt to delay the electoral process by introducing doubts about the legitimacy of the process.”

CNN has reached out to Bolsonaro’s office for comment.

Election paranoia and fears of unrest

Waldir Ferraz, a close friend of Bolsonaro who is also organizing the President’s motorcade through Rio, downplays the possibility that the President’s statements could incite unrest or produce chaos.

The Independence Day festivities in Rio will simply demonstrate the breadth of Bolsonaro’s support, he told CNN, with “a sea of ​​green and yellow.”

But he admits that this show of support is in part motivated by fans’ anger at an electoral system that they have been led to believe is tainted — despite the lack of evidence.

“There will be more than 1 million on the streets in Rio, because people are now angry with [Supreme Electoral Court chief] Alexandre de Moraes,” Ferraz says.

As the race heats up between Bolsonaro and Lula, the incumbent President has frequently made statements undermining the legitimacy of the electoral process among his fans — in what critics fear could set the stage for unrest if Bolsonaro doesn’t win reelection.

The President has called for some voters to be filmed at the ballot box (an idea squashed by the Electoral Court) and claimed that the country’s electronic voting system has been compromised in the past and is at risk of fraud now, though there is no record of fraud in Brazilian electronic ballots since they began in 1996. He has also suggested that the Armed Forces should perform a parallel ballot count to verify the result.

The military has previously served as observers during elections, along with representatives of political parties and universities. But as Lula pulls ahead in the polls, discussion among supporters of an even more active role by the Brazilian Armed Forces — including calls for a military intervention if Bolsonaro loses — has intensified on social media.

“We will not trust the results [if Bolsonaro loses] and will demand the president to call the Armed Forces to intervene. But note that this is not a coup, it is a counter coup,” says Roseno.

Against this backdrop, the potential for overlap between military events and pro-Bolsonaro campaign events on Independence Day could offer cause for concern. If the President turns his speech in Rio into a campaign opportunity, the military’s planned display of ships, parachutists and hourly rifle salutes could instantly take on ominous political significance.

“We should not have such an overlap of a national event with a large military participation with a campaign event,” said Casarões.

“The military that should be a state force that serves the interests of a government. [The Independence Day events] will allow Bolsonaro to use the military’s symbol …to lend credibility to his presidential candidacy,” he added.

Concerned about the possible politicization of Wednesday’s military maneuvers, the Federal Attorney’s office of Rio sent an official letter to the local Military, Naval and Air command publicized on Sept. 2 asking how it would ensure that official Independence Day celebrations would not be confused with partisan political demonstrations.

Asked if it had received a response, the Attorney’s office told CNN that the Armed Forces has until Wednesday morning to reply. The military did not respond to CNN’s request for comment.

Ever since Bolsonaro’s last year decree allowing military active-duty to hold public office, the border between his government and Brazil’s military leadership has been increasingly blurred.

The President, himself a former Army captain, has made no secret of his admiration of the Armed Forces. He frequently invokes the military on the campaign trail and has done little to avoid the appearance of politicizing the country’s military.

His vice presidential candidate is an active general, General Walter Braga Netto. In 2020, over 6000 members of his government were members of the military, according to a report published by the Federal Audit Court (TCU).

The sympathy appears to run both ways. The Armed Forces’ leadership has echoed Bolsonaro’s election fraud claims, raising its own doubts about voting security to the Electoral Court.

“We know very well that this electronic system always needs improvement. There is no program immune to an attack, immune to being invaded,” said Nogueira during a hearing at the Commission on Foreign Relations and National Defense.

“We are not doubting, or thinking this or that. It is simply a collaborative spirit,” added the minister.

Bolsonaro has said that he will accept the results of the upcoming Brazil presidential election “as long they are fair and clean,” in an interview with TV Globo’s Jornal Nacional this month.

Nevertheless, Roseno, the rally organizer, insists that he expects the worst. Falsely convinced that the deck is loaded against his candidate, he predicts that if the Armed Forces don’t intervene to ensure Bolsonaro’s reelection, “the people will” — conjuring exactly the vision of violent insurrection that experts warn the President inciting risks.

CNN’s Caitlin Hu in New York contributed to this report.