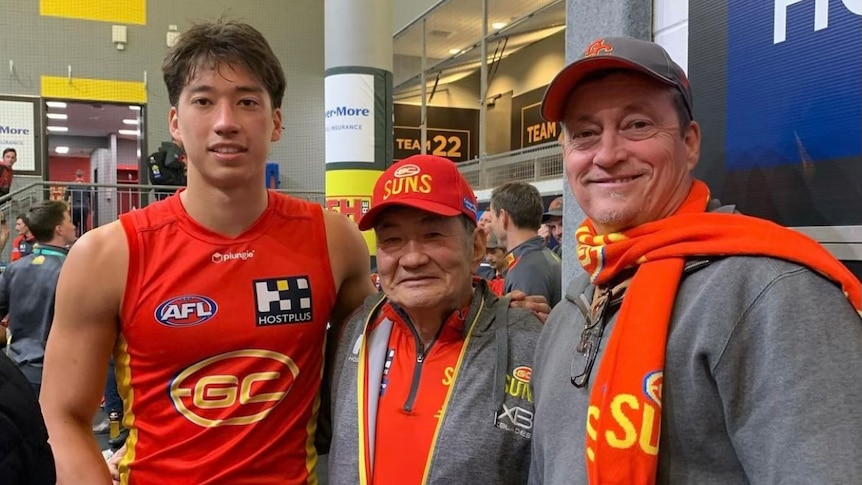 It was one of those beautiful moments that transcends the game of football.

Late in the final quarter of Sunday’s match between Gold Coast and Adelaide young Suns gun Alex Davies coolly slotted a goal on the run.

After focusing on the celebration, the cameras turned to the crowd, capturing Davies’s sister and grandpa Kazuhiro gleefully cheering on.

Dressed in Gold Coast colours, the 74-year-old had traveled from Tokyo to see Davies’s first game of AFL and embrace his family for the first time in three years.

Kazuhiro was even invited to join the winning circle and sing the team song, although he didn’t really know any of the words let alone the rules of the game.

“I wasn’t expecting that. It was the leaders that brought him into [the team song],” Davies told the ABC.

“They all got around him which was really good and he sung the song, which was pretty special for anyone to be a part of.”

Davies is one of a small cohort of players of Asian descent in the men’s and women’s AFL competitions.

Traditionally it has been rare to see an AFL player with an Asian background. There have been a notable few in recent times like now-retired players Lin Jong, Daniel Kerr and Peter Bell.

It’s still uncommon today — according to the AFL, fewer than 20 players with Asian heritage currently play at the elite level, despite Asian migrants making up about 40 percent of the 7.5 million Australians born overseas.

Davies grew up in Cairns as the son of a Tasmanian father and Japanese mother, and joined the Suns Academy as a young teenager, moving down to the Gold Coast at the age of 18.

Young Hawthorn defending Connor Downie followed a similar pathway, his talent identified by Hawthorn’s academy, which he was able to access by virtue of his Chinese heritage.

“I think seeing as there’s not many people of Asian descent playing football it makes me feel privileged and makes me feel like I can potentially be a role model,” said Downie, whose Chinese mother moved to Australia at the age of 24.

The 20-year-old Hawk says football comes first but once he is established he hopes to serve as an ambassador to grow the game in China.

“I think there’s a lot of opportunity. There’s a lot of Asian people in the community who love playing sport and I think football is an untapped area that we can really promote in Australia,” he said.

Downie said while his experience at Auskick was inclusive, football clinics that specifically catered to Chinese kids could be a way of promoting the game to diverse communities.

“Obviously it can be a bit daunting if you come from a different country and you’re the only one there [at Auskick].”

The AFL shares the idea and says engaging at a grassroots level is crucial to driving participation.

“There’s a local Chinese Auskick center [in south-east Melbourne] that’s been established by Chinese people there,” said the AFL’s international development manager Simon Highfield, who is responsible for attempting to grow the game in Asia, Europe and North America.

“So it’s about finding ambassadors, breaking down those cultural barriers and then hopefully letting Auskick centers or senior leagues in Tokyo to flourish.

“Internationally, we think that people like Alex and Connor and Mitchito [Owens]once they find their feet in the game, they’ll be great ambassadors for us to be able to take them internationally in China and Japan and showcase them.”

Jack Henty works for the Next Generation Academy at St Kilda, a program that snapped up Mitchito Owens, whose mother is Japanese.

Owens is the club’s first player of Asian heritage in more than 100 years, after Ernest Foo who played four games in the red, white and black in 1914.

“The AFL playing group is the major lens that people consume the game through,” he said.

Henty also works to promote the Saints in Melbourne’s south, including Greater Dandenong, which boasts the highest rate of diversity in Australia outside of Darwin.

“So if people from diverse backgrounds can see players like Mitch playing week to week at AFL level the hope is they’re going to be inspired to pick up the sport,” he said.