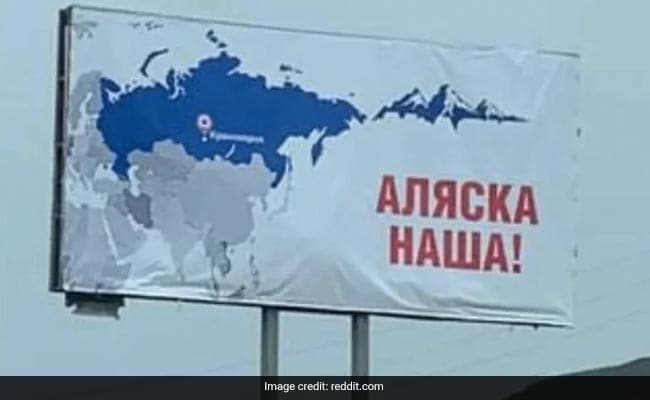 The billboard has appeared at many places across Krasnoyarsk.

A sign reading “Alaska is Ours” has been spotted in Russia’s Krasnoyarsk, a day after a key ally of President Putin that the country could reclaim the country sold to the United States in 1867. The photo of the billboard has been going viral on social media, with the users saying “they’ve gone totally mad”. Krasnoyarsk is located on the Yenisei River in Russian region of Siberia. Since the time Russia launched the military invasion in Ukraine, several such statements have appeared in media from Mr Putin’s allies.

According to a report in newsweek, the residents of Krasnoyarsk were surprised after spotting the billboards across the city on Thursday. But they do not appear to have been placed by the Russian government.

Krasnoyarsk restaurateur Vladimir Vladimirov told local news agency NGS24 that the billboards had been ordered by “some patriot”, reported newsweek.

That turned out to be a local company named “Alaska”. Commenting on the post of NGS24, it claimed the responsibility for the billboards.

The threatening billboards appear just a day after Mr Putin’s ally and speaker of Russia’s lower house of Parliament Duma Vyacheslav Volodin suggested that Moscow could “take back” Alaska in retaliation for economic sanctions imposed by the West following the country’s invasion of Ukraine.

US-led western countries have criticized Russia and Mr Putin for attacking Ukraine, which has created the worst humanitarian crisis since the Second World War. The war in Ukraine has caused hundreds of thousands of Ukrainians to leave their homeland and live as refugees in other countries.

Angry at Russia’s move, the West imposed unprecedented sanctions on Moscow, crippling its economy and leading to many big brands pulling out of the country.

Alaska was once part of Russia. On March 30, 1867, the United States reached an agreement to purchase Alaska from Russia for a price of $7.2 million, according to the US Library of Congress.