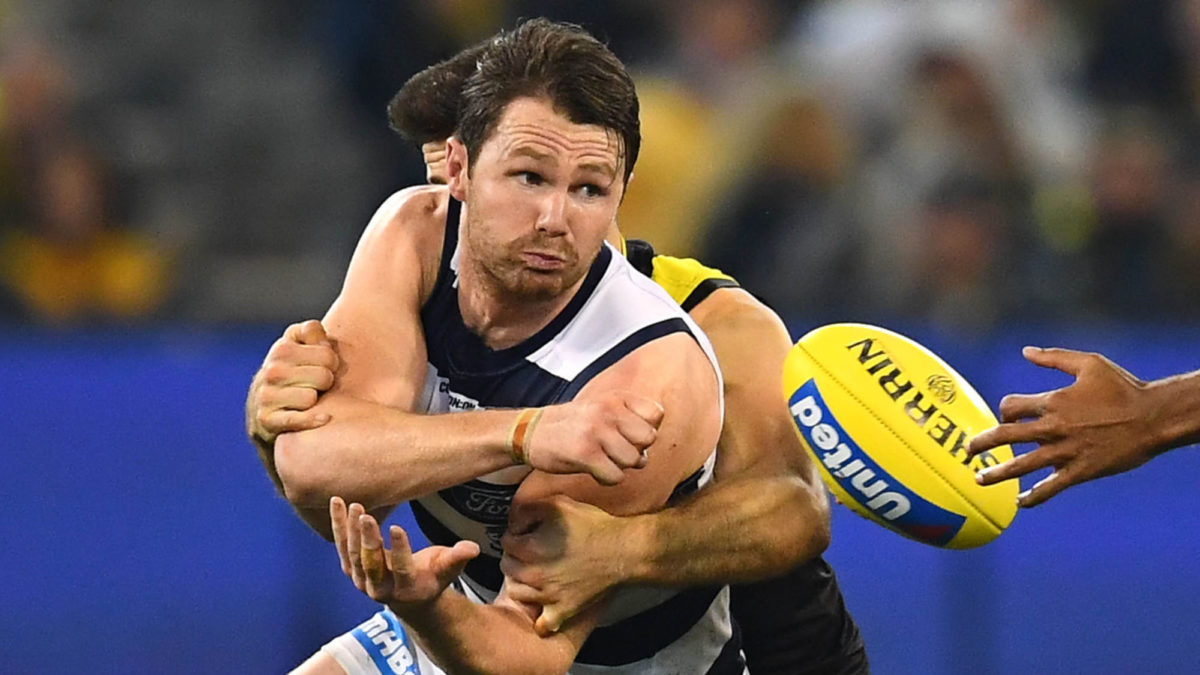 Geelong superstar Patrick Dangerfield will play his 294th AFL game on Saturday against Richmond, but it is too late!

Richmond’s Shane Edwards beat him to that number while Dangerfield was out injured and consequently became a top 100 game player last game, joining Jack Titus and Keith Greig in the hot seat of 294 games.

If Edwards plays this week (as expected), he will raise the bar for admittance to the AFL top 100 to 295 games, leaving Dangerfield one game short again.

And this will continue for the next three games after this one until Dangerfield plays his 297th game and draws level with Lenny Hayes (St Kilda) and Wayne Campbell (Richmond).

In the meantime, of course, Shane Edwards (if he plays the next three weeks) will have passed both Jack Titus and Wayne Campbell and will sit in fifth place on Richmond’s greatest game players list.

By the end of the season, he may have also passed the 300-game mark and Francis Bourke. Toby Nankervis will have played his 100th game for Richmond.

There is a bit of movement at the station at Geelong as well as ‘Danger’ still chasing an AFL top 100 spot, Joel Selwood equalling Luke Hodge on the AFL list, Jeremy Cameron playing his 200th AFL game and Mitch Duncan passing the great Gary Ablett and equalling former champion rover and captain Bill Goggin.

At the SCG, Jake Lloyd will pass old timer Bill ‘Sonna’ Thomas, who played for South Melbourne (now Sydney) from 1905 to 1913 before playing another 62 games for Richmond.

Thomas starred in the 1909 premiership and later captain-coached the Swans before moving to Richmond as captain.

For St Kilda, Sebastian Ross will pass Allan Davis who – at not yet 18 years old – was the youngest member of the 1966 St Kilda premiership side.

North Melbourne take on Adelaide in Tasmania on Sunday and for Todd Goldstein it will be his 287th game. That will equal the games tally of Mick Martyn at the Kangaroos and place Goldstein in equal eighth place on the club’s top 100.

Martyn’s old coach at the Kangaroos, Denis Pagan, surprised the AFL world by throwing a lifeline to Martyn and inviting him to Carlton in 2003 where he managed to play the 13 games required to reach his 300 AFL games and earn a place in the AFL top 100 game players.

Collingwood and Greater Western Sydney have each won six of their 12 encounters and their game at the MCG is a make-or-break contest for both teams.

Collingwood have much to celebrate with Steele Sidebottom about to overtake Wayne Richardson to become the fourth greatest game player in the black and white, Brayden Maynard to play his 150th game and Taylor Adams to join Charlie Laxton and Darren Millane in the hot seat of the Magpies ‘ top 100 game players.

Port Adelaide and the Gold Coast Suns still both have hopes of playing in the 2022 finals series, but those hopes are fading fast.

The winner of this game will still be able to hope but all hope will be gone for the losing team.