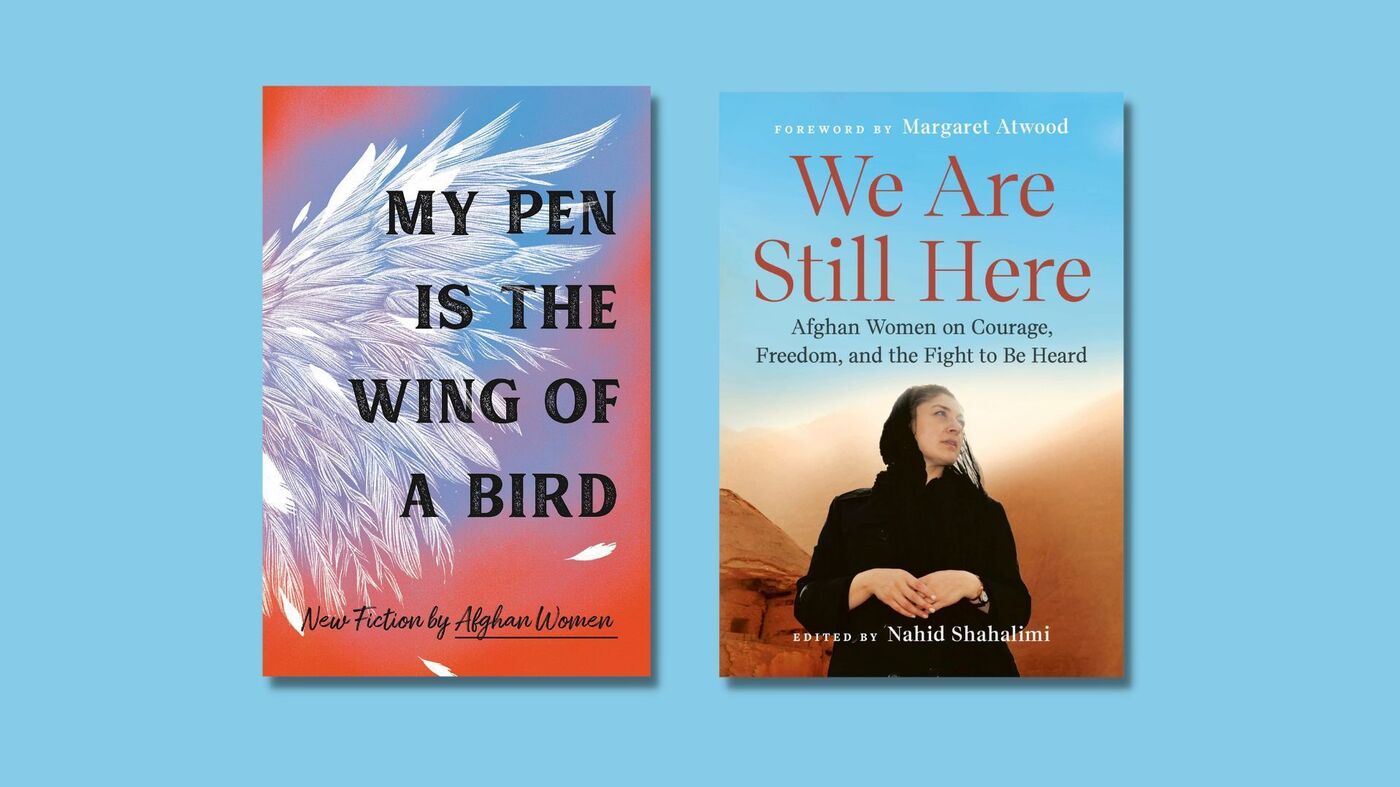 This week marks a year since the Taliban regained control of Afghanistan, a bitter anniversary for many Afghans and foreigners, like me, who lived and worked there. We watch in anguish as its leaders reestablish their punitive, hyper-conservative emirate that forces Afghan women and girls out of sight.

But the Taliban hasn’t succeeded in silencing the female half of Afghan society, whose voices at home and abroad ring out in two new and powerful anthologies: We Are Still Here: Afghan Women on Courage, Freedom and the Fight to Be Heard and My Pen Is the Wing of A Bird. Both projects were launched with great difficulty before Kabul fell, the generations of misogyny and war have stifled female expression. The return of the Taliban only increased the obstacles and the danger for the contributors, many of whom have fled.

We Are Still Here, a compilation of essays publishing this week — edited by Afghan-Canadian activist, author and filmmaker Nahid Shahalimi — is a crucial collection of first-hand accounts. In a forward, author Margaret Atwood recounts how her construction of women’s roles in The Handmaid’s Tale was influenced by her trip to Afghanistan in 1978.

“It is only by telling you about the past that you can truly understand what we once had and what we have repeatedly lost,” Shahalimi writes in the introduction. “As of August 15, 2021, there is no longer any hope.”

The stories and interviews in the collection involve 13 Afghan women, young and old, who’ve excelled in their various professions. They include a computer programmer, a parliamentarian, a filmmaker, a businesswoman, a peace negotiator, a singer, a former government minister and a journalist. All are educated and benefitted from relatives who empowered girls in their families.

Most of the women have experienced life as refugees. One is Razia Barakzai, who launched the first women’s protests in Afghanistan after the return of the Taliban. “Our groups are now much larger than the five women we started out with,” she writes. “Over six hundred activists from all over the world have come together in support of us and our goal is to continue to grow that support.”

Barakzai ultimately fled her homeland because of growing death threats.

What’s clear from the women featured in this collection is something I’d been told by a friend who played a prominent role in the previous Afghan government: There are many nonsense opinions among Afghan women on how to deal with the Taliban, making it difficult to unite against their common enemy.

Shahalimi argues a similar point in the anthology conclusion: “We are still here, and we will continue to raise our voices. But we will only see the change we need when everyone — women, men, Afghans and the international community — stand shoulder to shoulder in true solidarity.”

A literary agent told me once that it’s important for writers to offer readers hope. It isn’t something easily found in the pages of this book. The collection does, however, provide important detail and fascinating personal narratives that highlight how Afghan women and girls embraced the opportunities afforded them over the past 20 years.

I did find hope, though, in the another anthology, My Pen is the Wing of a Bird — publishing in the US in October. It includes 23 gut-wrenching stories translated into English from Dari or Pashto.

The collection’s 18 contributors were selected from among some 100 entrants to the Untold — Write Afghanistan project. The project was started in 2019 for women writers marginalized by community or conflict. Project founder Lucy Hannah writes that it isn’t safe at the moment to reveal detailed identities of the book’s female wordsmiths — some of whom use pen names.

She adds that after the Taliban takeover last year, the 18 women “looked to each other for reassurance. They shared how they couldn’t sleep, how they had dyed their clothes black, how they had soaked away the ink from pages of writing that was now a risk to possess as hard copy. Some took to the streets, others went into hiding; and six crossed borders and are now living in Germany, Italy, Iran, Sweden, Tajikistan, and the USA.”

That heightened awareness is evident in their storytelling.

“We smell onions frying in kitchens. We hear the jingle of an ice cream cart. We hold a purple handbag,” explains BBC journalist Lyse Doucet in the collection foreword: We sit on the ‘soft chocolate-covered seats’ of a luxury car which could only be afforded by someone else. These are the details we recognized in our own lives.”

But there are many details we can’t identify with and, like Doucet, I had to occasionally look away from the page.

“The Most Beautiful Lips in the World,” an exquisitely written piece by Elahe Hosseini, proved especially difficult to read. It is told from the perspective of an impoverished child who is coaxed into becoming a suicide bomber so she can reunite with her dead mother. The story draws from a real attack three years ago at a wedding hall in the Afghan capital.

Some of the stories are told from the male perspective, including “D for Daud” by Anahita Gharib Nawaz about a teacher’s Dickensian sacrifice for a young student. But most of the anthology focuses on the extreme challenges Afghan women face and not just from the Taliban during this past year. Like “Daughter Number Eight” by Freshta Ghani, the story of a woman who fasts with tragic consequences, in hopes that her eighth child will be a boy.

The anthology also delves into sexual identity and unrequited love, dangerous themes in Afghanistan even before last August.

As tragic as it is, this intense collection does inspire hope that Afghan women and girls will persevere. One of my favorite stories is “Blossom” by Zainab Akhlaqi, about two school friends and their dreams that draws from a devastating terror attack last year on a school in an impoverished Kabul neighborhood called Dasht-e-Barchi.

It’s a familiar story to me, as I spent years reporting on young girls and women defying incredible odds to attend school across Afghanistan, even if it meant sitting in the dirt in dangerous spots like Kandahar and Helmand provinces or Dasht-e-Barchi. I remain in awe of their resilience, just as I do of the women in both anthologies.

Soraya Sarhaddi Nelson opened NPR’s first Kabul bureau in 2006 and was bureau chief there until 2010. She is currently based in Germany where she hosts the podcast “Common Ground Berlin” and is working on a book about female Afghan mountain climbers who fled to Europe.