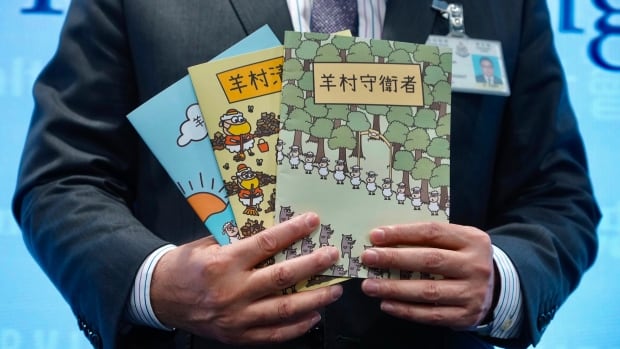 Five Hong Kong speech therapists were found guilty on Wednesday of a conspiracy to publish seditious children’s books that were deemed anti-government, a decision denounced by rights campaigners as a blow to free speech in the China-ruled region.

The five were accused of publishing three picture books, featuring cartoons of sheep and wolves, which government prosecutors alleged had spread separatism and stirred up hatred and opposition to the government.

Lorie Lai, Melody Yeung, Sidney Ng, Samuel Chan and Marco Fong, aged between 25 and 28, had pleaded not guilty and chose not to testify or summon any witnesses. They could face up to two years’ imprisonment and will be sentenced on Saturday.

All were members of the General Union of Hong Kong Speech Therapists.

The picture books referenced current events, including the city’s mass pro-democracy 2019 protests, as well as 12 pro-democracy protesters who fled Hong Kong by speedboat in 2020 and were captured by the Chinese Coast Guard.

In one book, wolves want to occupy a village and eat the sheep, who in turn start to fight back.

It is the first time that a seditious publications case has gone to trial since the 2019 protests and the imposition of a national security law on Hong Kong by Beijing in 2020.

In a written summary, District Court Judge Kwok Wai Kin said all three books were seditious, not merely from the words “but from the words with the proscribed effects intended in the mind of the children.”

“They will be told that in fact, they are the sheep, and the wolves who are trying to harm them are the PRC Government and the Hong Kong Government,” wrote Kwok, who is on a panel of national security judges selected by the city’s leader.

The books were available for free at several local bookstores and digital versions circulated online.

Government prosecutor Laura Ng said the books had anti-Chinese elements that might incite “hatred” against Beijing.

Defense lawyers broads had argued that in the sheep and wolves were fictional books and the sedition allegation is too “cause a chilling effect” on freedoms.

Anson Wong, a defense lawyer for Sidney Ng, cited a report by the United Nations’ Human Rights Committee, which had urged authorities to repeal the security law and avoid its use in sedition cases as there was an “overly broad interpretation” and an ” arbitrary application” of the law.

Another defense lawyer, Robert Pang, told the court that if people were barred from presenting different narratives of an event, then truth would be “hidden.”

“Everyone is entitled to have their own opinions and how the particular set of facts is interpreted. There are many different views of how historical events are to be seen.”

Critics say that authorities have used the British colonial-era sedition offenses as a tool to silence legitimate criticism of the government, and to stifle free speech.

In a statement after the conviction, human rights group Amnesty International called for the immediate release of the five, saying the use of “archaic” sedition laws was a “brazen act of repression.”

“Writing books for children is not a crime, and attempting to educate children about recent events in Hong Kong’s history does not constitute an attempt to incite rebellion,” it said.

The Hong Kong government did not immediately respond to Reuters’s questions for comment.

Authorities have said all individuals in Hong Kong are prosecuted based on evidence — and that the national security law has brought stability after the pro-democracy protests.