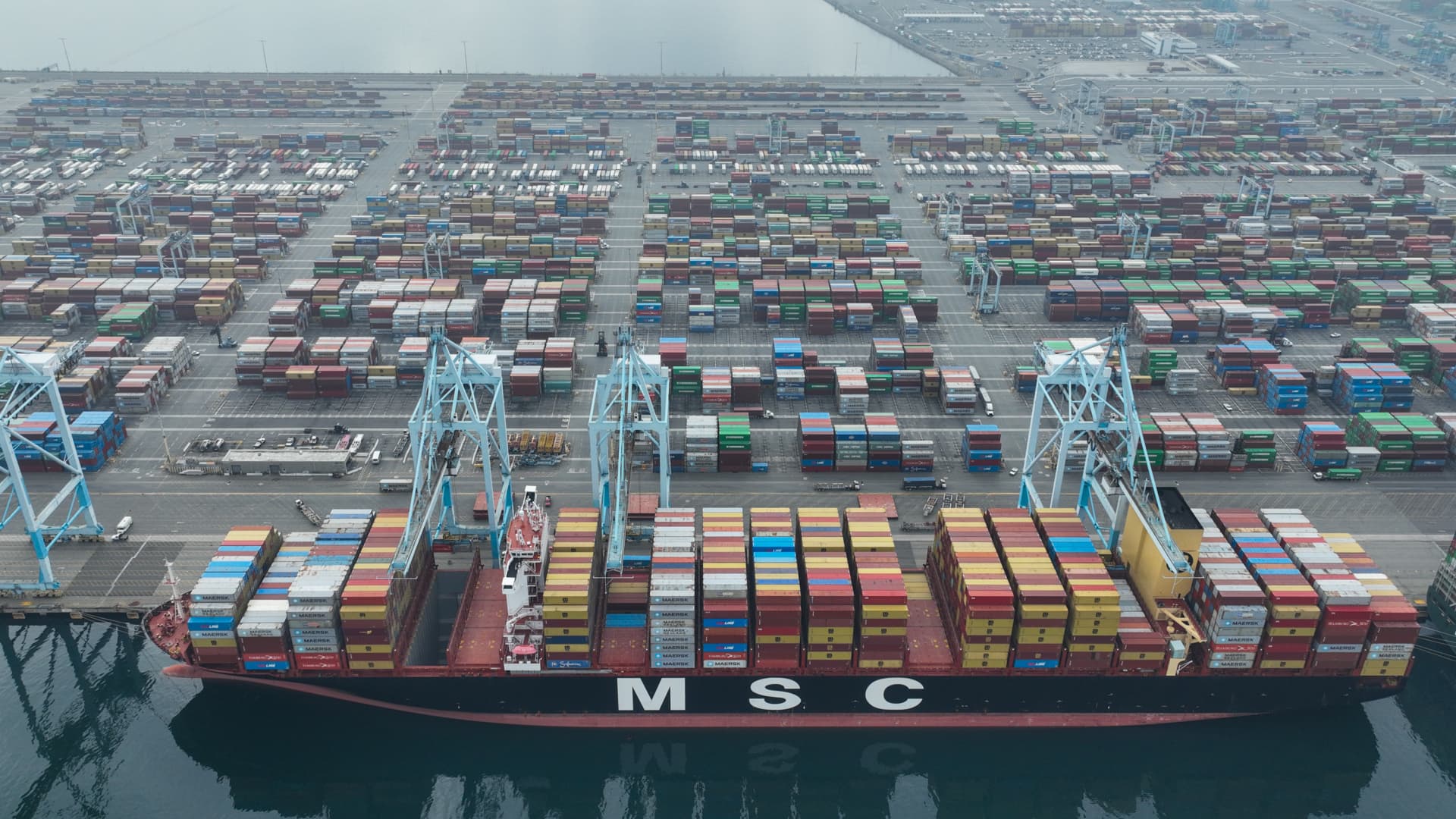 Aerial view of containers and cargo ships at the Port of Los Angeles on Jan. 19, 2022 in San Pedro, California.

Tens of billions of dollars in trade are either landlocked or anchored at sea in the United States and in Europe as congestion builds at the ports.

An important component in this picture is supply chain inflation and its impact on what consumers will ultimately pay for goods.

According to data from MDS Transmodal, the nominal value of goods moved in container, measured at the global level, has grown by almost 9% between 2019 and 2021. But Antonella Teodoro, senior consultant at MDS Transmodal, explains that considering that the average annual increase in the previous two years was in the range of 0.7%, “it is reasonable to believe that the main cause of the estimated increase in the last two years is the escalation in freight rates.”

The approximate total value of trade stuck on the water is estimated by MDS Transmodal at roughly $30 billion.

Fears of a US rail strike

On Monday, the Railway Labor Act’s 30-day cooling-off period ends and fears of a rail worker strike are growing. The Biden Administration would need to step in ahead of the deadline to prevent the railroad unions to have the ability to strike. Contract negotiations have been on and off since the contract expired in 2020.

In a letter addressed to President Biden last week, a coalition of US importers urged the Biden administration to establish a Presidential Emergency Board (PEB) to help the nation’s largest railroads and rail labor groups reach a contract settlement.

“The Administration has been going through the standard process that has been used in the past when considering a PEB,” the White House said in a comment to CNBC.

The most recent US rail strike in 1992 reportedly cost the US economy $50 million per day, a rate which would presumably be higher in the event of a strike today.

According to logistics company Woodland Group, unions say the impasse has left trains dangerously understaffed and employees overworked, whilst the National Railway Labor Conference has offered a counter including retroactive reparations and significant pay increases.

Meanwhile, the pile-up of containers bound for rail waiting at the Ports of Los Angeles and Long Beach continues to pile up.

The approximate total value of trade inside those containers is estimated by MDS Transmodal at over $1.54 billion dollars.

“Rail containers continue to pile up in the ports in record numbers,” said Noel Hacegaba, deputy executive director of administration and operations of the Port of Long Beach. “We need those boxes to move to create more capacity and to keep the economy moving.”

These long dwelling containers clog up the port’s land capacity, inhibiting the movement of trade within the port. Land capacity at the Port of Los Angeles is up to 90%. For efficient land capacity, 70-75% is the optimal goal. As a result of this increase in container volumes, vessel processing is taking more time.

Wage negotiations between the German labor union and port employers reached another impasse resulting in a 48-hour strike from Thursday morning until Saturday morning.

A court-ordered “peace obligation,” according to sources, may mean no more strikes with the exception of the current strike until August 24. Although the court ruling only formally applies to the Port of Hamburg, sources say there is an assumption there will also be no strikes at the other locations during this time.

According to the CNBC Supply Chain Heat Map for Europe, the fluidity of trade is gone.

Alex Charvalias, lead of supply chain in-transit visibility at MarineTraffic said, “A worsening situation in Hamburg with close to 200,000 TEUs waiting for a berth indicates that waiting times will get higher in the coming weeks.”

“Containers are not easily available at the terminals nor at the inland depots,” said Braun. “Shipping lines are having extreme issues moving empties back on the return leg to Asia. This will worsen the availability of empties in Asia to be filled with exports,” he said.

Braun noted this is all happening before the peak season starts on the Far East westbound trade route.

“Importers in Europe have to expect delays to get their Christmas orders. For the United States, European trade is also being delayed as well,” he said.

The growing port congestion in Europe and the United States has logistics managers now looking closely at the rate of canceled or blanked sailings being announced by ocean carriers, which has trended down in recent weeks. Sailings are traditionally canceled in an effort by vessel lines to make up time and regain schedule reliability. The other reason is lack of demand. Given the still high volumes of containers moving out of China, the reason behind the more recent canceled sailings was scheduled related.

According to Sea-Intelligence, ocean carrier schedule reliability is around 36.4%.

Canceled sailings limit the availability of vessel space which could push up freight prices. Currently, spot prices are lower than the long-term contract rates, something that has not happened in years.

According to the CNBC Supply Chain Heat Map for China, vessel availability is currently not a problem.

While vessel availability is strong, that could change in August if ocean carriers decide to omit certain US ports in a bid to move trade at a faster pace.

Logistics managers tell CNBC they would not be surprised if this happens.

“As congestion grows on the East Coast, ports can be omitted,” said Alan Baer, ​​CEO of OL USA.